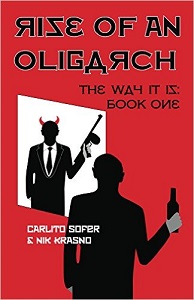 When Ukrainian oligarch Mikhail Vorotavich is close to achieving his ambition of topping the Forbes rich list, an assassination attempt leaves him in a coma and his vast business empire rapidly descends into turmoil.

Aspiring to get legit he moves to London, but behind his new pretended façade nothing really changes. And the higher Mikhail climbs the wider is the circle of enemies that want him dead.

Meanwhile, his partners, in a quest to discover who is behind the attack, stumble upon a conspiracy that, if realised, would change the world order. The mighty adversaries will stop at nothing.

Conspiracies, old scores, powerful enemies and the blurred lines between decency and corruption all surface.

This book is worth reading if only for the potted history of the Ukraine and its relationship with the rest of the world; particularly with Russia. It certainly provided background to the current turmoil in what I discovered was one Europe’s biggest providers of food, manufactured goods and arms.

Mikhail Vorotavich is a very bright young man who was determined to be successful but he did it the only way he knew possible which involved deceit, corruption and violence. Although Mikhail is clearly a criminal the authors told his story so convincingly that I found that I had sympathy for him, particularly when he attempted to “go legit”. I also enjoyed the way that he built his tight team of friends and colleagues.

Although this is a work of fiction there have been enough reports in the press to suggest that everything in this book probably happened somewhere at some time even if it was not all done by one person. I understand that Nik Krasno is a Ukranian born lawyer which adds weight to the complicated corporate schemes that Mikhail effects.

Although he thinks of himself as a man of the people, Mikhail’s ultimate victims are the ordinary people of Ukraine and Africa. The authors give us the impression that if Mikhail was not screwing them then someone else would which is depressing. The UK is not left out with Mikhail’s purchase of a London mansion and a UK football club, both with allegedly laundered money. Knowing the UK’s anti-money laundering laws I would hope that was not possible but this book leaves me wondering.

All this is delivered through a very well written and easy to read book which kept my attention throughout.

The rather long title suggests that this is the first of a series and indeed the sequel Mortal Showdown: The Way It Is, Oligarch Series written by Nik Krasno alone has already been published. I have not yet read that but I will do so shortly in the hope that it matches the original story. In the meantime I have no hesitation in awarding Rise of an Oligrach: The Way It Is: Book One five stars.

Nik Krasno is one of those writers who never thought he would end up authoring a book. He just knew that he had a story that apparently waited for the right moment to break out.

For many years Nik had been involved in law and business in few Eastern European countries, spending most of his time in Ukraine.

Witnessing the meteoric rise of a small number of individuals from modest citizens to mighty billionaires, Nik felt compelled to expose to the world the unique phenomenon taking place in this less familiar part of the globe. In the fictional plot of his Oligarch series he combines real and imaginary events with some ‘lawyers’ folklore’ and known corruption and criminal schemes customary for Ukraine and other former USSR republics.

The author also shares some insight into the glorious and simultaneously tragic events of 2013 uprising in Ukraine resulting in ousting of the president, ensuing Russian aggression in Crimea and tensions and war in the Eastern regions of Ukraine. The imaginary characters are designed to reflect real behavior and mentality and provide decent entertainment for the readers.

Remember movies based on Bill Gates’ and Mark Zuckerberg’s biographies describing their path to wealth and glory? Although they were truly amazing, Nik thinks the rise of their Eastern billionaire peers is just a little more thrilling and unorthodox.