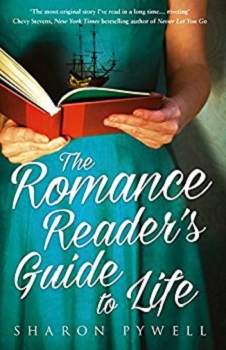 The Romance Reader’s Guide to Life

Growing up in the shadow of the Second World War, twin sisters Lilly and Neave could not be more different: Lilly is a beauty who runs through men like water, but Neave is a bookworm who would rather read about life than live it. While Lilly is breaking hearts, Neave loses herself in the illicit romance novel The Pirate Lover.

As grown women they are expected to settle down and marry, but instead they set their sights on creating their own cosmetics business – that is, until Lilly suddenly disappears… Desperate to find her sister, Neave receives help from the most unlikely of places, proving that the bond between sisters can overcome anything in life – and beyond.

A haunting, darkly funny and thrilling tale of sisterhood, showing us that sometimes the guiltiest of pleasures can be our salvation. The Romance Reader’s Guide to Life is a compulsively readable novel of equal parts mystery, romance, and family saga, with a dash of dark comedy.

This was a very enjoyable reading experience, but I’m not sure I’d call it a romance novel – despite the title and cover. I’m not sure what I was expecting going in, but it wasn’t drama, dark mystery or a theme of violence against women…

The book comes at you from a number of directions and timelines, primarily the lives of two sisters, Neave and Lilly, from their early childhood onward.

Neave is surly and belligerent though clever and strong willed, which is kind of fun to read because she isn’t particularly likable and everyone knows it – she’s not afraid of anyone and is brutally honest in all things, which isolates her from any friendships she might make.

Lilly, however, isn’t a bit shallow but she’s a people person and manages to complement all of her sister’s weaknesses when it comes to running a successful business in post-war USA. Women have been thrown out of the jobs they filled when all the men were fighting, creating a tension between men and women that wasn’t there before.

The chapter alternates between the perspectives of both sisters, as well as including chapters from a romance novel that Neave read as a child which we can draw parallels with as their story progresses. The perspectives the author uses to narrate this book are eccentric, which does make it stand out from the competition but, though it did work for me, I can see it being difficult for many readers to enjoy. It employs some of the same tricks as Lovely Bones, which was one of the few books I’ve never managed to finish.

Personally, I loved the historical drama of how two women created a successful business enterprise in the 1930s as well as the missing person element after Lilly’s disappearance, the romance part I could take or leave given that most men and boys in this book were simply horrible.

If you take this book as a dark mystery with strong female voices, you’re in for a very strange treat.

Sharon Pywell grew up on the edge of Upstate New York’s snow belt. She has published in a number of literary quarterlies and held residencies at the MacDowell Colony. Her previous novels include WHAT HAPPENED TO HENRY and EVERYTHING AFTER. Professionally, she has run dog kennels and dance companies, though she now teaches and writes in Boston.