There were six main categories including:-

There is also an award for outstanding achievement.

Once the six winners had been selected there was an overall winner chosen to win the associations highest accolade ‘The Goldsboro Books Romantic Novel of the Year’ award.

Winner Contemporary Category Romantic Novel of the Year – for mainstream romantic novels set post-1960, and can include chick lit, paranormal and romantic suspense

Can a mother’s secret past provide the answers for a daughter’s future?

Celebrity photographer Grace Buchanan has always known that, one day, she’d swap her manic day job for the peace and quiet of her beloved childhood cottage, St Christopher’s – she just didn’t expect it to be so soon.

At the reading of her mother’s will, she’s shocked to learn that she hardly knew Rosamund at all, and that inheriting St Christopher’s hangs on one big – and very inconvenient – condition: Grace must drop everything for two weeks and travel the country with a mysterious stranger – war-weary Royal Marine, Alasdair Finn.

Caught in a brief but perfect moment in time, Grace and Alasdair walk in Rosamund’s footsteps and read her letters at each breathtaking new place. As Grace slowly uncovers the truth about her mother’s incredible life story, Alasdair and Grace can’t help but question their own futures.

Will Rosamund’s madcap scheme go to plan or will events take an unexpected turn? An emotional, fun-filled and adventurous journey of a lifetime.

The Secrets We Share by Emma Hannigan
(Headline Review)

Devastated after a tragedy, Nathalie Conway finds herself on a plane to Ireland. She is on her way to stay with her grandmother Clara. The grandmother up until now Nathalie had no idea existed…

As Clara awaits her granddaughter’s arrival, she is filled with a new sense of hope. She has spent the last twenty years praying her son Max would come back into her life. Perhaps now her son can find a way to forgive her for the past. And her granddaughter may be the thread to stitch the pieces of her beloved family back together.

Letters to the Lost by Iona Grey
(Simon & Schuster)

Winner Historical Category Romantic Novel of the Year – for novels set in a period before 1960.

Letters to the Lost

1943, in the ruins of Blitzed London… Stella Thorne and Dan Rosinski meet by chance and fall in love by accident. Theirs is a reluctant, unstoppable affair in which all the odds are stacked against them: she is newly married, and he is an American bomber pilot whose chance of survival is just one in five.

He promised to love her forever.

Seventy years later Dan makes one final attempt to find the girl he has never forgotten, and sends a letter to the house where they shared a brief yet perfect happiness. But Stella has gone, and the letter is opened by Jess, a young girl hiding from problems of her own. And as Jess reads Dan’s words, she is captivated by the story of a love affair that burned so bright and dimmed too soon. Can she help Dan find Stella before it is too late?

Now forever is finally running out.

Afternoon Tea at the Sunflower Café

Love and friendship bloom at the Sunflower Café…

When Connie discovers that Jimmy Diamond, her husband of more than twenty years, is planning to leave her for his office junior, her world is turned upside down.

Determined to salvage her pride, she resolves to get her own back. Along with Della, Jimmy’s right-hand woman at his cleaning firm, Diamond Shine, and the cleaners who meet at the Sunflower Café, she’ll make him wish he had never underestimated her.

Then Connie meets the charming Brandon Locke, a master chocolatier, whose kindness starts to melt her soul. Could he be her second chance at happiness?

Can the ladies of the Sunflower Café help Connie scrub away the hurt? And can Brandon make her trust again?

Her Duke in Shining Armour? GP Julia MacKenzie’s life is finally back on track! Fighting to save St Bryar’s Clinic has helped her to forget her heartache and make way for a new future – on her terms.

Until Julia falls into gorgeous Dr Oliver Wyatt’s arms – literally – and suddenly her whole world is turned upside-down! Not only is Oliver the Duke of Breckonshire in-waiting, he’s the very man threatening to shut her practice down…and, even more worryingly, to steal her heart!

While on holiday in Montana, Hope meets local boy Cal Crow, a ranch-hand. Caught in a freak accident, the two of them take shelter in a mountain cabin where Hope makes a strange discovery.

More than a hundred years earlier, another English girl met a similar fate. Her rescuer: a horse-trader called Nate. In this wild place, both girls learn what it means to survive and to fall in love, neither knowing that their fates are intimately entwined.’

There were two outstanding achievement awarded this year for, continued championing of the RNA and romantic fiction.

Anita Burgh who is the author of twenty three novels, all published after she reached 50, including The Visitor

Claire Lorrimer, who has written more than 100 novels including, Georgia. She is also the daughter of the RNA’s first President, best-selling novelist Denise Robins.

The overall winner on the night who walked away with ‘The Goldsboro Books Romantic Novel of the Year’ trophy and a cheque for £5000, presented by Fern Britton was:

Iona Grey – ‘Letters to the Lost’ 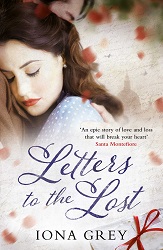 Letters to the Lost
Author – Iona Grey
Pages – 560
Publisher – Simon & Schuster UK
Release Date – 23rd April 2015
Here at Whispering Stories, we would like to say a big congratulations to all the winners.
Blog posts straight to email via Bloglovin – Like us on Facebook – Follow us on Twitter