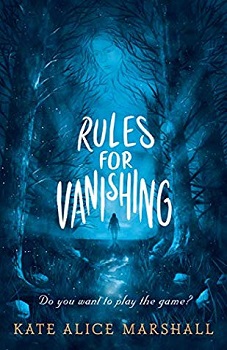 Do you want to play the game?

Once a year, a road appears in the woods at midnight and the ghost of Lucy Gallows beckons, inviting those who are brave enough to play her game. If you win, you escape with your life. But if you lose…

It’s almost a year since Becca went missing. Everyone else has given up searching for her, but her sister, Sara, knows she disappeared while looking for Lucy Gallows. Determined to find her, Sara and her closest friends enter the woods. But something more sinister than ghosts lurks on the road, and not everyone will survive.

Nearly one year ago Becca went missing, her parents think that she ran away with her boyfriend but her sister Sara has another solution to the mystery – She played the game and became lost in another world.

Legend has it that in 1953 little Lucy Callows (now renamed Gallows) went missing in the Briar Glen Woods. She was last seen wearing a white dress with a blue sash, her brother Billy was sent to look for her and he swore he saw his sister being led away by a man but he couldn’t get to her as the road they were on just disappeared. She was never seen again. The road is supposed to appear once a year leading to another dimension and you have to follow the rules carefully or you will become trapped there. Lucy is waiting for those who dare to play!

Sara had overheard her sister Becca talking about the game and after she had disappeared she found a notebook belonging to Becca containing all the rules to play the game. She is determined to bring her sister back and on the anniversary goes to the woods to see if the legend is true.

Sara isn’t alone though, her friends are waiting for her, they don’t want her to go alone and so when the road does reveal itself to them they join hands and start their journey – Nine enter the road but how many will make it to the other end?

Rules for Vanishing is a very creepy and spooky novel that follows a group of teenagers entering a strange and unpredictable dimension. The book is told via transcribes, written testimonies, interviews, exhibits, and video evidence. We know from the beginning that the game begins in April 2017 and that the transcribes, etc are conducted in May 2017 and that Sara is the main person being interviewed, so we know that Sara makes it out alive, what we don’t know is who else made it with her and if she found her sister.

The book is told in five parts – The Game – The Road – The Beast – The Girl – The Truth. There are lots of rules to the game including you must bring a key to get through the seven gates, make it through all of them and you have completed the game and are free to leave. Along the way, the teenagers encounter many obstacles and strange beings. I was desperate to get through the book as I needed to know who made it out alive at the other end of the road and what unworldly beings and games would they have to face.

The writing is superb and the book has a real atmospherically feel to it, you get the feeling of being in some dark, strange unnerving place whilst reading and can picture what is happening perfectly. You also get the sense of impending doom just waiting in ever chapter. There is a lot of mystery to the book and sometimes it has the feeling of trying to piece the puzzle together to work out what really happened.

The book was such a great read and I enjoyed it the whole way through. The ending was perfect too which made me so relieved as I was apprehensive that it was going to be one of those books that you get to the end of and then they state, ‘it was all a dream’ or ‘someone made the whole thing up’. Although it is one of those endings that will make you think about what you have just read and analyse it.

Kate Alice Marshall started writing before she could hold a pen properly, and never stopped. She lives in the Pacific Northwest with a chaotic menagerie of pets and family members, and ventures out in the summer to kayak and camp along Puget Sound. She is the author of the YA novels I Am Still Alive and Rules for Vanishing.