Halloween happens to be one of my favourite celebrations of the year, though it may have something to do with it also being my birthday – hence the witch logo for the blog. It is also the perfect time of the year to read that scary book, though be-warned you may end up having a very sleepless night!

1) Promised Land Lane by Marcus Brown – Newly released on 17th October 2017, it has already gained 50 five star reviews, and that front cover should give you an indication of how scary it is. 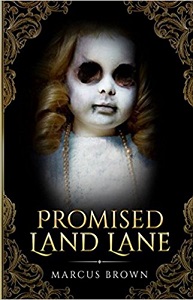 In 1901, an innocent child was cruelly tortured, and murdered by her vengeful mother.

Twisting her once beautiful soul into something evil and monstrous. Her name was Maisie Whitmore. Bound forever to Promised Land Lane, she will take her revenge on those foolish enough to cross her path.

If Maisie sees you. Run, for she will never forget.

2) The Stand by Stephen King – This book was recommended to me on Twitter as a book to make the hairs stand up on the back of your neck. With 433 five star reviews, it must be one to look out for. There is also a film adaptation of it too. 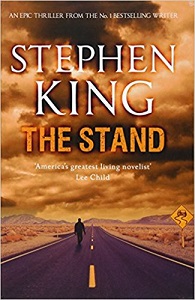 First come the days of the plague. Then come the dreams.

Dark dreams that warn of the coming of the dark man. The apostate of death, his worn-down boot heels tramping the night roads. The warlord of the charnel house and Prince of Evil.

His time is at hand. His empire grows in the west and the Apocalypse looms.

When a man crashes his car into a petrol station, he brings with him the foul corpses of his wife and daughter. He dies and it doesn’t take long for the plague which killed him to spread across America and the world.

3) Sealskin by Su Bristow – A tale based on the legend of the Selkies, which are said to live as seals in the sea but shed their skin to become human on land. They are coerced into relationships with humans by someone stealing and hiding their sealskin. It has mixed reviews, but mainly good ones.

What happens when magic collides with reality?

Donald is a young fisherman, eking out a lonely living on the west coast of Scotland. One night he witnesses something miraculous … and makes a terrible mistake. His action changes lives – not only his own, but those of his family and the entire tightly knit community in which they live.

Can he ever atone for the wrong he has done, and can love grow when its foundation is violence?

4) House of Leaves by Mark Z. Danielewski – Another book that was recommended to me on Twitter. This book has some rave reviews, although a lot of people have said it is a quite hard, but rewarding read. It will give you chills. 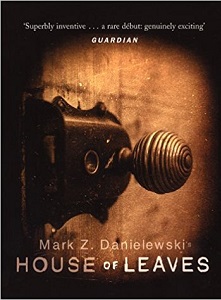 A young family moves into a small home on Ash Tree Lane where they discover something is terribly wrong: their house is bigger on the inside than it is on the outside.

A blind old man, a young apprentice working in a tattoo shop, and a mad woman haunting an Ohio institute narrate this story of a family that encounters an endlessly shifting series of hallways in their new home.

They eventually come face to face with the awful darkness lying at its heart.

5) The Wasp Factory by Iain Banks – If you like gruesome horror books then this one is for you. Be careful, it may make your stomach turn! 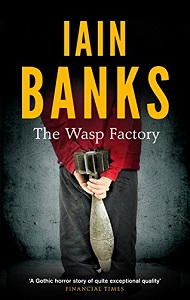 ‘Two years after I killed Blyth I murdered my young brother Paul, for quite different reasons than I’d disposed of Blyth, and then a year after that I did for my young cousin Esmerelda, more or less on a whim. That’s my score to date. Three. I haven’t killed anybody for years, and don’t intend to ever again. It was just a stage I was going through.’

Enter – if you can bear it – the extraordinary private world of Frank, just sixteen, and unconventional, to say the least.

6) The Exorcist by William Peter Blatty – What Halloween book list would be complete without a classic. The book was originally released in 1971, and just two years later one of the most famous horror films based on the book was released. It is still shown in cinemas at this time of year. 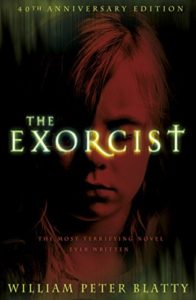 The terror begins unobtrusively. Noises in the attic. In the child’s room, an odd smell, the displacement of furniture, an icy chill. At first, easy explanations are offered.

Then frightening changes begin to appear in eleven-year-old Regan. Medical tests fail to shed any light on her symptoms, but it is as if a different personality has invaded her body.

Father Damien Karras, a Jesuit priest, is called in. Is it possible that a demonic presence has possessed the child? Exorcism seems to be the only answer…

7) John Dies at the End by David Wong – Something a little different for you. This book is a mash up of genuine scary moments mixed amongst disturbingly funny scenes. You need to read it to see how this author has brilliantly combined the two.

My name is David Wong. My best friend is John. Those names are fake. You might want to change yours. You may not want to know about the things you’ll read on these pages, about the sauce, about Korrock, about the invasion, and the future. But it is too late. You touched the book. You are in the game. You are under the eye. The only defence is knowledge. You need to read this book, to the end. Even the part about the bratwurst. Why? You will just have to trust me.

Unfortunately for us, if you make the right choice, we will have a much harder time explaining how to fight off the otherwordly invasion currently threatening to enslave humanity. I m sorry to have involved you in this, I really am. But as you read about these terrible events and the very dark epoch the world is about to enter as a result, it is crucial you keep one thing in mind: NONE OF THIS IS MY FAULT.

8) Macabre Tales by Jaime Peters – This is a book filled with sixteen short stories. From the spooky to the violent, there is something different in each of them to sink your teeth into.

Victim Twenty-Five – Danny likes to hunt women. The city is his hunting ground and he has been killing for years. He is a successful serial killer. He is intelligent and charismatic and methodical in his work. He knows that he can never fight the urge and the time has come to kill again. Victim number twenty five is a milestone in his criminal career. It deserves a celebration, but a twist of fate awaits Danny. And it is one that he never expects.

The Hunted – Four university students plan a weekend away. But when they drive into the countryside, they encounter a nightmare that will affect their lives forever. And the local village is populated by murderous psychopaths. Can they escape the horrors that await them?

Cord – Mary is a convicted child killer who will never be released, Having been jailed since 1988, she decides to escape. She murders her psychiatrist and escapes, picking up a hitch-hiker along the way. But they both have deeper and darker secrets – and one has a darker ulterior motive.

This is a collection of short horror stories by Jaime Peters. The collection consists of a total of sixteen stories: Victim Twenty-Five, The Hunted, Cord, True Love, Small Town Vampire, Executed, Hippy Trip, The Monk, The Lift, The Final Night at Watkin’s End, The Girl in the Afghan Coat, Cool Company, We Are Both Dead, The Solicitor, The Honey-Pot, Dolls

9) The Angel of Vengeance by Wade H. Garrett – This is the ultimate book of horror. This will give you nightmares. WARNING! Contains GRAPHIC CONTENT, ADULT LANGUAGE & POLITICAL INCORRECTNESS, and may be disturbing to sensitive readers.

In a dimly lit cell, a man has awakened to find himself surrounded by the most unimaginable and barbaric things that not even his worst nightmare could conjure up. His captor, Seth Coker, takes the man on a journey into his twisted world of vengeance. A world that runs parallel with the horrors that could only be found in the deepest and darkest parts of hell. A world that bestows a wrath of chaos upon the wicked of our society who have fallen through the cracks of the judicial system.

Seth wasn’t born a vigilante, nor did he seek out the role—it sought him out. A portion of our society feels that rapists, molesters, murderers and abusers should have rights, and anything beyond the normal punishment of confinement would be cruel and inhumane.

Seth knows that the innocent are left without justice, while the wicked are roaming our streets without any remorse about the cruel and inhumane punishment that they bestow upon others.

10) The Bell Witch by Brent Monahan – Well I couldn’t leave out a book about a witch now could I! This book is based on the legend that is ‘Old Kate’ in Tennessee, USA. Some people are believers, some people are sceptics – which side do you stand on? 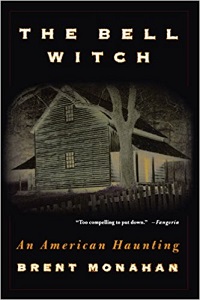 Known throughout Tennessee as “Old Kate,” the Bell Witch took up residence with John Bell’s family in 1818. It was a cruel and noisy spirit, given to rapping and gnawing sounds before it found its voices. With these voices and its supernatural acts, the Bell Witch tormented the Bell family.

This extraordinary book recounts the only documented case in U.S. history when a spirit actually caused a man’s death. The local schoolteacher, Richard Powell, witnessed the strange events and recorded them for his daughter. His astonishing manuscript fell into the hands of novelist Brent Monahan, who has prepared the book for publication. Members of the Bell family have previously provided information on this fascinating case, but this book recounts the tale with novelistic vigor and verve. It is truly chilling.

So there you have it, my ten choices for Halloween. Have you read any genuinely scary books? Which books would you add to this list?