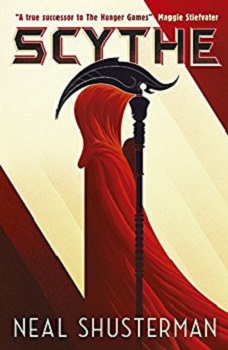 Scythe
Arc of a Scythe Book One

A dark, gripping and witty thriller in which the only thing humanity has control over is death.

In a world where disease, war and crime have been eliminated, the only way to die is to be randomly killed (“gleaned”) by professional scythes. Citra and Rowan are teenagers who have been selected to be scythes’ apprentices, and despite wanting nothing to do with the vocation, they must learn the art of killing and understand the necessity of what they do.

Only one of them will be chosen as a scythe’s apprentice and as Citra and Rowan come up against a terrifyingly corrupt Scythedom, it becomes clear that the winning apprentice’s first task will be to glean the loser.

This is the first instalment in a trilogy with an amazing premise – mortality is a thing of the past, but population control is obviously something that needs to be implemented so certain citizens are picked to become ‘scythes’ – essentially the people in charge of deciding who dies and the method of their deaths. Everyone else can live infinitely and reset their physical ages whenever they feel like it.

Citra and Rowen are picked by the Scythe Faraday to become his apprentices and find that the organisation of Scythedom is at odds with itself – some scythes have differing opinions on what their duties are towards the main population and that leads to political friction.

The pacing of this book was a little bit drawn out for my tastes, it could have done with a bit more action to break up the philosophy and politics. The interactions between the characters were interesting but they didn’t feel completely developed so I wasn’t able to fully empathise with them, this story hinges completely on its originality and its mysteries – in this case, I think those things are enough to make it a thoroughly enjoyable read.

One thing that I’ll address is that this book is being touted as the next Hunger Games…. Yea….. No. The only similarities between the two is that there is a teenage boy and girl involved in peril. The world building in the Hunger Games isn’t as far removed from our reality, whereas Scythe is a bit more sci-fi and has some excellent world building so we can understand the principles on which everything operates.

I really enjoyed this book and look forward to reading the rest of the series, where I hope the main characters will have some more room to grow and stretch their legs!