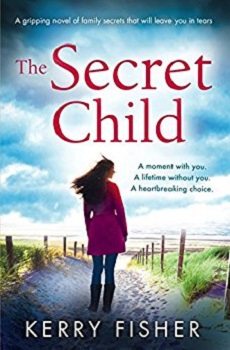 You can run from your past, but it will always catch up with you…

Susie was forced to do something she will always regret: giving her baby son up for adoption. Everything that led to this child, this choice, had to be buried and forgotten.

Her secret echoes down through the years, tainting everything it touches. Her husband wonders why his wife is so distant. Her daughters can’t understand their changeable mother.

Susie knows her past is pushing her family apart, and the guilt is eating her up, but she can’t escape the longing for her lost son. No-one but Susie knows the whole story, and when her daughters discover a piece of the puzzle, she must face the question she has struggled with for most of her life:

Would the truth bring them back together, or break them?

In 1963 Susie was forced to give up her newborn baby son for adoption. She wasn’t some silly teenager pregnant with her first child, Susie was a happily married mother to one daughter, Louise.

Susie had decided to go through the heart wrenching decision as the baby wasn’t her husband Danny’s child. Her mother convinced her that her marriage would be over if Danny returned home from his tour of duty, after being away for fifteen months, and found her with another man’s child.

As the years passed by Susie was desperate for another child, but month after month, year after year, she failed to become pregnant. Then in 1977 a miracle happened, and her second daughter Grace was born, but even a second daughter couldn’t take away her guilt and regret.

For 45 years Susie lived with her heartbreaking decision the best she could, but in doing so she had become distant from her husband, and an overbearing, pushy mother to her daughters.

The Secret Child is one hell of a roller-coaster emotionally wise. The book opens in 2013 with Susie talking about what happened to her in 1968, from her time staying with her aunt after she was sent away so people wouldn’t know she was pregnant, to the birth of her child. Don’t be so quick to judge though until you have read her full story.

The book then goes back in time to July 1968 whilst Susie still had her son, just a day away from giving him up for adoption. Each chapter is a different period in time, as the book moves from one month to the next and sometimes jumping years. You get to feel how much pain Susie felt and how it impacted on her life and those close to her, especially her daughters who she was desperate to save from repeating her mistakes.

It was heartbreaking at times to read, but I needed to know Susie’s story. I felt like I was sitting with an elderly relative whilst they were telling me about their life, a life that they never fully lived.

The book is split into two parts, the second from her youngest daughter Grace’s point of view and how as a young woman she resents her mother’s strictness. I love how Ms. Fisher told us Susie’s story and how much her decision in 1968 affected her for the rest of her life, then in the second part how we get to see how the way she brought up her children, whilst living with that guilt affected their lives too.

This is a poignant story that I’m positive truly represents how a lot of women who back in the day were forced to give up their babies for adoption feel every day. I can’t imagine being without my three boys, so it’s hard to comprehend how it must feel to live every day knowing that you have a child somewhere out in the world, wondering what their first word was, what school they went to, what qualifications they got.

Ms. Fisher has a beautiful way with words that resonated deep inside me. I can see Susie’s story staying with me for a long time to come.

I write funny, honest books about ordinary women and family life. When I’m not doing that, I can be seen haring across the Surrey hills trying to stop my lab/schnauzer eating other people’s picnics or running off with their kites. Or helping my teenage son think back to when he might last have seen his rugby shorts. Or explaining to my daughter that I can help with English, Latin and Spanish but art, technology or, ugh, sewing, she’s on her own. Or telling my very tolerant husband that the dog needs organic chicken because she’s got a sensitive stomach but could he make do with an omelette?

But I wasn’t always a writer. Once I left my hometown of Peterborough to go to university in Bath, I got the travel bug and have never recovered. I was an English teacher in Spain and Corsica, a holiday rep in Tuscany, a PA in an art school in Florence, a guidebook researcher and author, travel journalist. Horizons, broad, exciting, unknown and promising were what inspired me. Nothing thrilled or terrified me quite as much as landing in a foreign country with a whole new territory to discover.

And then the children arrived…and with them disappeared the days of elephant riding in Thailand, testing new theme park rides in America and abseiling down the highest tower in Rotterdam. So I had to find new ways of exploring far-flung lands. After working as a book reviewer for Candis magazine, I realised fiction was the way to keep that sense of anticipation and excitement alive.

When the children were young, the challenge was finding the time to write. Now both are at senior school, the challenge is to write down the funny (and sometimes hideous) things they say before I forget in case I need to use them in a novel – in our house, there’s no such thing as a free lunch. Even the dog has to make friends on the hill so that I can talk to their owners about books. So if you see otherwise sane-looking women leaping into hedges and hiding behind oak trees on the Surrey Downs, they’ve probably spotted me heading their way with my latest book recommendation…

Other than reading and writing, I love cooking, entertaining, wine and friends…I’m more like Clover than Jen1 – not very groomed and a bit messy, though I don’t have wellies in my kitchen sink. Or a trust fund…

Have a read of our interview with Kerry – ‘The Writing Life of: Kerry Fisher’ 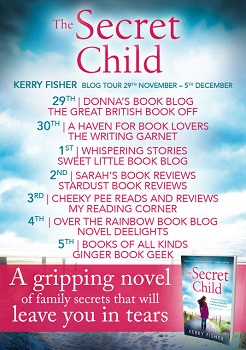