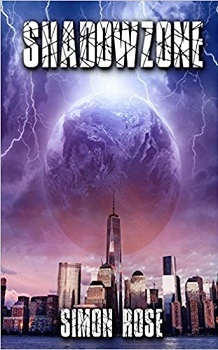 While watching intense flashes of lightning during a violent storm, Ben experiences mysterious and disturbing visions of another world, one very different from his own.

In the chain of events that follow, Ben encounters Charlie, a girl from a dark version of Earth, a planet doomed by the effects of environmental catastrophe, where the leaders will stop at nothing to complete their deadly mission.

The aptly-named ‘Shadowzone’ is the first in a series by American author, Simon Rose. We see the action primarily through the eyes of Charlie, a girl who lives on a dystopic earth and Ben, a boy who inhabits a far more pleasant place, environmentally akin to the world we know.

As we join the story, the two parallel universes look destined to merge as the barrier between them becomes weakened. The framework for the plot is conveniently explained with some useful backstory, courtesy of an inquisitive Charlie.

I found the early chapters are a little disjointed as we moved between the two threads but I settled into the story after the main characters made contact. We find out quickly that Ben and Charlie are of school age but I’m not sure we’re actually told how old they are, unless I missed it. However in view of their general levels of intelligence and abilities, I would assume they are supposed to be at least twelve.

Most of the action takes place on Charlie’s home planet which is reeling from the after-effects of a natural disaster. The author has painted a very atmospheric picture of the destruction and decay of this bleak, pollution-filled world which is potentially heading for oblivion and this provides an excellent backdrop. Most of the population are controlled via a variety of unpleasant means and we experience a sense of foreboding for their future.

I think the characters could do with a little more depth but as this is the first in a series, there is time for them to develop. Several aspects of the plot are rather contrived but if the audience doesn’t overthink it, the tale is a fun read with some interesting ideas and it will appeal to pre-teens or teenagers who enjoy fantasy and sci-fi.

I have an eight year old bookworm who liked the concept and coped well with the prose but struggled a bit with some of the plot. I’m sure the novel is aimed at slightly older readers but nonetheless, he is looking forward to another instalment.

At 168 pages, the author has delivered an action-packed adventure which is quite short and straightforward. Parents need not be concerned regarding content as, whilst there are moments of heightened suspense, there is little overt violence and no adult themes.

There are clearly more adventures ahead for Ben and Charlie and if Simon Rose can maintain this standard, I think his target audience will thoroughly enjoy finding out what happens next. I award ‘Shadowzone’ four stars.

Simon Rose is the author of The Alchemist’s Portrait, The Sorcerer’s Letterbox, The Clone Conspiracy, The Emerald Curse, The Heretic’s Tomb, The Doomsday Mask, The Time Camera, The Sphere of Septimus, Flashback, Future Imperfect, Twisted Fate, and the Shadowzone series.

He is also the author of The Children’s Writer’s Guide, The Time Traveler’s Guide, a contributor to The Complete Guide to Writing Science Fiction and has written many non-fiction books.

Simon offers a wide variety of presentations, workshops and author in residence programs for schools, along with virtual author visits by video. He is an instructor for adults with the University of Calgary and Mount Royal University and offers a variety of online workshops for both children and adults.

Simon offers a number of services for writers, including coaching, consulting, editing, and writing workshops.