She’s Like the Wind by Carrie Elks – Book Review

She’s Like the Wind by Carrie Elks – Book Review 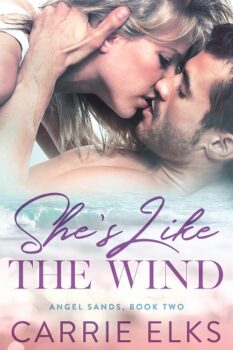 He’d be a fool to fall for his long-legged, barefoot employee. But bad decisions have never stopped him before…

Successful businessman and single father, Nate Crawford, doesn’t need any more complications. That’s why he’s moved his business – and his life – to a small beach town. He’s expecting sun, sea and tranquility, but what he gets is a whirlwind in the form of town sweetheart, Ally Sutton.

Ally’s used to dealing with heartache. But losing the café she’s owned for years is the final straw. Being offered a new job feels like a lifeline – that is until she meets her much-older, and impossibly handsome new boss.

In the space of a few weeks everything changes. And when an accident forces them closer, Nate and Ally can’t ignore the fascination between them any longer. As the summer heats up, the question is when, not if, they’ll give in to their explosive attraction.

She’s Like the Wind is a light easy read, a romantic novel with an unexpected twist. It is written from the point of view of the main character Ally Sutton who runs a seaside cafe. Her father ran it for years before he suddenly took off and left Ally to do it all on her own. Suddenly along comes Nate Crawford, owner of a string of coffee shop, who tells Ally that he’s brought the cafe from her father with the proviso that she is kept on as the manager.

I loved Ally. She is so much stronger than she thinks she is. She is also known and loved by the locals and has two very good best friends, Ember and Brooke, who are there for her no matter what. I also liked Nate Crawford’s character who is a forty-something businessman and a single father to Riley.

I really enjoyed this book which is the perfect read to curl up on the sofa with, especially on cold, wet days. The storyline follows the predictable boy meets girl plot with them falling for each other, although there were a few twists that gave it some drama. The beginning was slow-paced, but the book picks up about halfway through and finished leaving me wanting to read more from Carrie Elks.