She should never have let her go. That was Victoria’s first mistake…​

When a stranger leaves stepsisters, Victoria and Ness, a half-share in a house in Holland, they think it must be a mistake. But there’s no mistake when Ness goes missing.

Desperate for the truth, Victoria travels from Guernsey to Holland to find out what’s happened to her. Has she, as her texts show, embarked on a whirlwind romance? Has someone abducted her or even worse?

What she doesn’t know is there’s someone watching, and that person wants her dead. Can Victoria find out the truth before it’s too late? 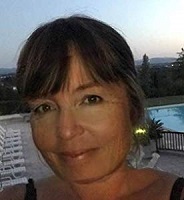 Jenny O’Brien was born in Ireland and, after a brief sojourn in Wales, now resides in Guernsey.

She’s an avid reader and book reviewer for NetGalley in addition to being a RoNA judge.

She writes for both children and adults with a new book coming out every six months or so. She’s also an avid collector of cats, broken laptops, dust and happy endings – two of which you’ll always find in her books.

In her spare time she can be found frowning at her wonky cakes and even wonkier breads. You’ll be pleased to note she won’t be entering Bake-Off.