A Summer of Secrets by Alice Ross – Book Review

A Summer of Secrets by Alice Ross – Book Review 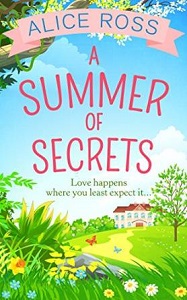 Portia is determined to restore Buttersley Manor, her family’s crumbling ancestral home, to its former glory. Yet she has a feeling that there are a few forgotten skeletons in the dust-covered cupboards.

Jenny has put her life on hold for far too long. It’s time to finally start living and to dig up those hopes and dreams she’s kept hidden all these years – but is she brave enough?

Rich is happily married with a beautiful wife and lovely daughter. In fact, his world is perfect until a very unexpected consequence of his past walks through the door…

Joe would like nothing more than to travel back in time to when he and Gina were happy. But is it too late to rescue what they once had?

One thing’s for sure, nothing’s ever quite what it seems when it comes to life in the country!

When Portia returns to Buttersley for her father’s funeral, she also needs to sort out the family home, Buttersley Manor, a place that was once the show of the village.

She is still in love with the town and her friends live there, so she decides to stay and live at Buttersley Manor, however the place is in disrepair and it is going to take a lot of money to fix it up.

Jenny is controlled by her overbearing mother who blames her for her fathers death. Her mother constantly bullies her and now in her 50’s Jenny is trying to take control of her life back, but it isn’t all smooth sailing.

Richard is married to the love of his life, but a surprise from the past is set to rock his family life.

Joe, the window cleaner, who offers his clients an extra service of ‘happiness’, has a chance meeting with his ex, and their son that he hasn’t seen for a long time. Will the two of them get back together, and after all this time of pining to get his family back, is this truly what Joe wants?

The book set in the quaint, yet exquisite village of Buttersley and is all about the towns residents dealing with their own personal problems, of which there are many. The lives of the residents interweave and it was lovely to have that crossover between the individual stories.

It is hard to say which character I liked the best, as they were all unique and each brought that special something to the story.

I did feel so sorry for Jenny though, as I couldn’t understand how any mother could say the things that her mother did to her, and emotionally blackmailed her continuously on a daily basis. I’d have walked out many years ago. Mother or no mother, I wouldn’t allow someone to treat me as a doormat.

There is always something fun and exciting going on in Buttersley, and I couldn’t wait to zoom through the book to find out what Alice had in store for her characters. It was nice to see some of them evolve and become different people to how they started out, including some of the secondary characters.

Alice has done a fantastic job, and I can’t wait to read more from her. 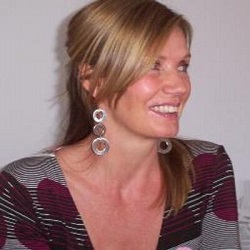 Alice Ross used to work in the financial services industry where she wrote riveting, enthralling brochures about pensions and ISAs that everyone read avidly and no one ever put straight into the bin.

One day, when nobody was looking, she managed to escape. Dragging her personal chef (aka her husband) along with her, she headed to Spain, where she began writing witty, sexy, romps designed to amuse slightly more than pension brochures.

Missing Blighty (including the weather – but don’t tell anyone), she returned five years later and now works part-time in the tourism industry.

When not writing, she can be found scratching out a tune on her violin, walking her dog in wellies two sizes too big (don’t ask!), or standing on her head in a yoga pose. 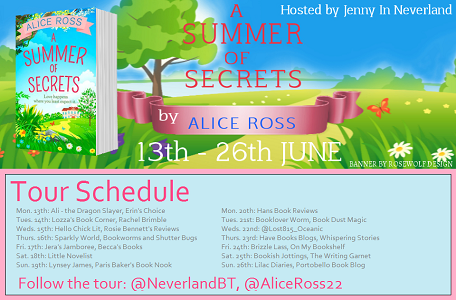