The Sword of the Spirit by Rob Keeley – Book Review

The Sword of the Spirit by Rob Keeley – Book Review 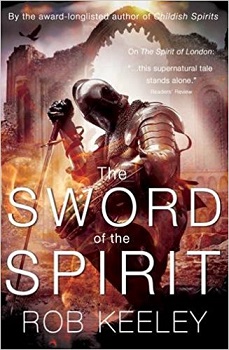 Following the success of his award-longlisted Childish Spirits and its sequel The Spirit of London, prolific children’s author Rob Keeley is back with The Sword of the Spirit, the third instalment in his thrilling and suspenseful Spirits series.

Ellie’s investigations into the spirit world have reached a medieval castle, where archaeologists are digging for the fabled Sword of St Merrell. But she didn’t expect to meet a real medieval knight. Nor was she expecting him to be an ancestor of Edward Fitzberranger.

Ellie discovers that behind a legend of chivalry and bravery lies a dark and nasty truth. And worse is to come. Ellie’s meddling has consequences she could never have foreseen. This time, she may have gone too far.

Ellie is back, and this time the family is living at Holiley Castle, having been relocated there by JourneybackUK, who her mum works for.

The trust is planning a medieval fayre to be held at the castle, and Ellie’s mum and the staff are busy getting everything ready. There is also an archaeological dig taking place in the grounds, looking for the burial place of St Merrell Sword, a sword that has been missing for centuries and is believed to be cursed.

One afternoon Ellie is nearly knocked over by a knight riding a horse, who unfortunately falls off and hurts his arm. On going to help, she quickly realises that he isn’t from the 21st century, but he isn’t a ghost either. His name is Sir Francis Fitzberranger, and he is an ancestor of the house.

When the sword is discovered, the evil that is within it is released, putting not only those within the castle in danger, but the world too. It’s up to Ellie to discover what is going on, with a little help from Edward, the ghost.

The Sword of the Spirit, is the third book in the Childish Spirits series. It can be read as a stand alone, but it would be best understood, and enjoyed, if you read it as part of the series.

Ellie is a young girl with a big heart, always trying to do the right thing. In the first book we learn that she can see and speak to ghosts, and that there is some kind of connection between her and the spirit world. She has also been warned not to meddle in that world, but alas, she keeps on finding herself dragged into the past lives of ghosts.

Edward, the ghost, who we met in the first book, and played a part in the second, didn’t really feature in this one. I like Edward, he is funny and mischievous and I did miss him. I would of loved for him to of had a bigger role.

The book is well thought out and superbly written, with a very clever plot. I loved the historical aspect, and the chemistry between Sir Francis Fitzberranger and Ellie, who takes everything in her stride. I particularly found the relationship between the past and the present interesting.

The supernatural elements, mixed with the present create a suspenseful book, and you are just waiting for the drama to begin, and the two periods in time to clash.

The book is slightly scary, but this one is more of a adventure, mystery book than a dark ghost story. Whilst it is less scary than the first two, it is just as enjoyable and exciting, if not more so. We also find out more about how Ellie being linked to the past, is causing problems in the present.

Read our reviews of the other books in the series – Book One, Childish Spirits – Book Two, The Sword of the Spirit

I’m a writer of novels, short stories and drama, particularly for children and a family audience.

I am the creator of the “Spirits” series of ghost novels and the third of these, “The Sword of the Spirit” was published in July 2016. The first in the series, “Childish Spirits“, was longlisted for the Bath Children’s Novel Award as well as being nominated for the People’s Book Prize and the International Rubery Book Award.

The second in the series, “The Spirit of London” was highly commended for the Independent Author Book Award. I also had a collection of short stories for children (“The Dinner Club and Other Stories”) longlisted for the Rubery Award.