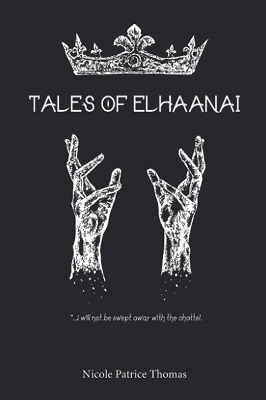 A JEALOUS SISTER. A MOTHER MURDERED WITH THE HEIR IN HER WOMB. POWER STRUGGLES AND BETRAYALS BLOCK THE WAY TO THE THRONE FOR THE ONE WHO WOULD BE KING.

In a land where evil has infiltrated the hallowed halls of its rulers, leaving deception and death in its wake, Alric must not only discover who he is and master his gifts but he will have to face an insidious force creeping just below the surface of the hierarchy.

Alliances will be made and broken, spells will be cast and power will either come from the light or be lost in the darkness. Alric and his companions must develop the fortitude to see their journey to the end, facing both the future and the past, even if it comes at great personal cost.

Alone after her husband has been killed, pregnant High Priestess and Queen of Elhaanai, Alanna Bear-Claw is pursued by her evil sister-in-law who wants to be Queen and her son to be the heir. Running for her life she is cornered by men who have been sent to kill her. She is shot with an arrow and left to bleed out. But she is determined to save her unborn child’s life.

In a state and bleeding, she comes across a widow, Wleia who is pregnant with twins and asks for her help. Alanna can see things others can’t and she can see that the woman has lost one of her unborn children. She asks the woman if she can perform a magical ritual that will swap the dead child for her unborn son who is the true heir to the kingdom. However, in doing so she knows that this will kill her.

Sixteen years later Wleia has to tell her son, Alric that he is not her real child and that he is the heir to Elhaanai and the act that his mother did to save him. She also gives him instructions that were left for him for when he turns sixteen on how to take back his kingdom, though his ‘twin’ sister Elainea will have to play a part in securing his true heritage too.

Tales of Elhaanai is a mystical, fantasy novel that had hints of Games of Thrones with the setting, family rivalries, and bitter battles.

The book opens with Alanna being cornered by the men who have been sent to kill her, then it moves back six months, and then it jumps forward sixteen years. This was all done in a short period of time and I would have liked to have explored Alanna’s life with her husband and his murder more than it was.

The world-building was hit and miss. Parts were done amazing and came across strong, such as when Alric sets off to take back his throne, whilst others especially at the beginning it was hard to get a sense of where and when the book was set.

The ‘twins’ Prince Alric and Elainea for me held the story, being brought up together, with little money and away from prying eyes the pair worked well together and learning to use their magical gifts which come to them when they are sixteen.

If you like fantasy books which include jealousy, rivalry, revenge, and coming of age then this book is perfect for you.

Nicole Thomas was born in Queens, New York in 1984. She has been married for 10 years and has one daughter and one cat. For her “Outside of church, there is no where more refreshing for my soul than curled up in a corner with chocolate and a good book.” And that love led into writing. She has always enjoyed reading, her favorite genres being christian fiction, historical fiction and fantasy.

Tales of Elhaanai, her first novel, is a mystical blending of those genres. Early one morning Nicole heard Alanna’s voice as she ran for her life through the mists. That is how Elhaanai was born. She is currently working on the second book in The Elhaanai saga.