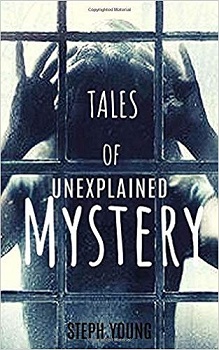 Why was a man found in the same spot he disappeared, 4 years later, with a hole in his head that no surgeons could explain, and what did this have to do with a séance, doppelgangers, and the assassination of Abraham Lincoln?

What happened to Elisa Lam, found dead in a water tower on the top of a hotel roof. Who were the two men that came to see her & what was in the mystery box they gave her? How could her grave stone & the last place she was seen share the same zip code?

Why did a man write the Fibonacci sequence as a clue and tell a stranger he was “Looking for the Beast,” before he disappeared in the barren plains of a desert? Plus many more mysterious, intriguing & puzzlingly cryptic true stories of the Unexplained…

Who doesn’t love a mystery, especially one that stubbornly refuses to be solved? That is the question Steph Young asks in her introduction to this collection of strange but true stories. It’s a good one too because at some level we are all fascinated by things we can’t explain.

The stories collected in this book come from both sides of the Atlantic and range from the curious to the downright frightening. They include disembodied hairy hands seizing hold of car steering wheels on an English country road; dark and possibly occult-related goings-on in Clapham Woods and the 1982 disappearance of New York advertising executive Donald Kemp in the wilds of Wyoming.

Two stories that stand out are the strange deaths of Elisa Lam and Netta Fornario. One died in a seedy Los Angeles hotel, the other on a hillside on the Scottish island of Iona.

Their deaths are separated by almost a century, Lam died in 2013, Forninio in 1929, yet have similarities in that both women were eccentric loaners who behaved strangely in the days before their death. After their death links, some more tenuous than others were made to possibly esoteric symbolism.

These and all the other stories contained in this book could, of course, have logical explanations. Sometimes people imagine things that aren’t there, a murder of disappearance can be solved, given enough time and sufficiently methodical application of the investigative procedure.

At least they do if you believe the world works that way. Steph Young invites her readers to consider the possibility that it might not; happenstance may play a greater role in things than we are comfortable thinking.

This plays on a fascination with the things we think we sometimes glimpse out of the corner of our eye that is both very old and enduringly powerful. Young approaches her subject matter with an open mind, giving her readers, as the old TV show catchphrase used to go ‘just the facts’, then letting them marvel at their strangeness.

This is the sort of book that is a pleasure to dip into whenever you are looking for a taste of the less than usual. Although if you happen to do so at bedtime, you might feel a bit apprehensive when it comes to switching off the light.

Steph Young has appeared on national radio shows talking about many of these mysteries, and on her podcast on iTunes: Tales of Mystery Unexplained.

What did you think of Tales of Mystery Unexplained? Share your thoughts in the comment section below!