The Angel of Bishopsgate by Eloise Reuben – Book Review

The Angel of Bishopsgate by Eloise Reuben – Book Review 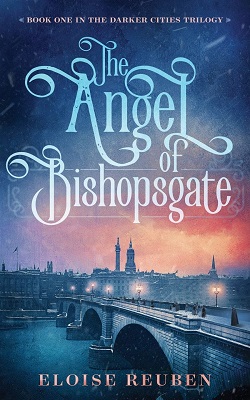 The Angel of Bishopsgate
Darker Cities Book One

A terrifying villain. A young woman desperate for answers. Danger and intrigue in Victorian London.

In 1848, Tessie and Finn struggle each day and dream of life far away in the New World, but when Tessie is attacked by an underworld figure known only as the Angel of Bishopsgate, her fight for survival has only just begun.

Separated from her beloved Finn, and oblivious to why the Angel wants her dead, her only clue points home to Dublin, and a past she thought would never find her.

Battling her way from the treacherous Old Nichol slums, and navigating the sparkling upper-classes, how will Tessie survive this game of cat-and-mouse with the city’s most notorious villain?

‘The Angel of Bishopsgate’ is a historical thriller by Australian-born, American-based author, Eloise Reuben. The story is written in the third person and the past tense. Our main player is 23-year-old Tessie O’Shea, who lives in a slum in Old Nichol Street, London in 1848, with her partner of eight years, Finn.

Tessie’s feckless mother has got into strife back in their native Ireland and the sinister Angel of Bishopsgate wants recompense. His henchman seeks out Tessie and gives her a task. This turns out to be no straightforward errand and so the story unfolds. Tessie and Finn become separated and we then follow their individual threads as they try to reconnect. They can only do so if they find a way to get out of the grasp of the ruthless ‘Angel’.

There is a good balance between dialogue and description but a few things bothered me. Firstly, lexicon; Tessie says ‘yer’ instead of ‘you’ but, in general, her diction is free from the vernacular. Some of the dialogue is awkward and there are numerous examples of conversations which the average UK reader might find incongruous. For example; ‘a shilling and a half’ would be one-and-six and ‘two shilling’ would be two bob.

Secondly, context; this streetwise couple were struggling for money, yet paid well above the odds for their pies. They also managed to afford lodgings with a dedicated stove; not many slums in the early part of the 19th Century would have boasted such a luxury.

Finally, and most importantly, Victorian England was a time of great change with a huge chasm between rich and poor. I wanted to fully immerse myself in those filthy dangerous streets with their dark passages filled with hidden menace but I found it difficult to do so, when I wasn’t convinced by the setting and lacked sympathy for the main characters and their foils.

On the plus side, the author has made a valiant attempt to use descriptive prose to add colour to her tale and some of the literary techniques she employed worked nicely. Although a couple of the anatomical analogies bothered me; ‘the questions danced along her spine,’ and ‘something rumbling in her spine.’

The theme was good versus evil, with elements of love, loyalty and hope, contrasting with hate, fear and betrayal. There are a couple of interesting twists but overall, I found the plot rather too stereotypical.

This might not be for devotees of accurate historical backdrops but, nonetheless, it’s a neat and tidy story with a competent structure. It certainly never flagged and what it lacked in depth, it made up for in drama; I particularly liked Tessie’s time in Ireland and the build up to the climax, so I award a very respectable three-and-a-half stars. To elevate the star rating to a four or five, the subsequent adventures in the series will need to break new ground in terms of thorough research of social setting and interplay between the cast.

Eloise is an Australian living in the United States with her husband, young daughter and 3 mischievous puppies. She is a lover of old cities and all things travel. She writes historical thrillers bursting with adventure, suspense and plenty of heart.

What did you think of The Angel of Bishopsgate? Share your thoughts in the comment section below!