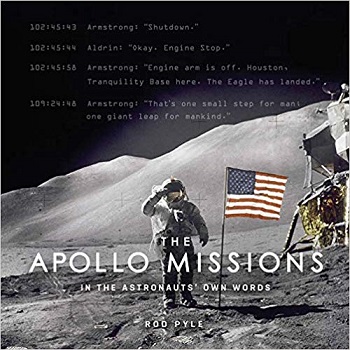 The Apollo Missions
In the Astronauts’ Own Words

The Apollo Missions tells the significant, spectacular and intriguing story of the Apollo space programme through first-person accounts by the astronauts themselves, explained and put into context with expert commentary by Rod Pyle.

Travelling to the most forbidding environment known to man, twelve courageous individuals stepped out of their tiny spaceships and onto another world. And with that, the history of humankind was irrevocably changed.

But the adventures live on, and with the 50th anniversary of the moon landings in 2019, the world is once more gazing moonward. The Apollo Missions contains over 100 images – many of which are rarely seen – drawn from original NASA film. Creating a remarkable book that transports readers to a world they have never seen like this before.

The book begins in 1961 with President Kennedy announcing that America would go to the moon and that NASA had to find a way to get there. In 1967 Apollo 1 was ready for pre-flight testing at Cape Kennedy in Florida, three astronauts were inside. Unfortunately, Apollo 1 never took off. Shouts from inside about a fire in the cockpit sealed the men’s fate and all three died without ever leaving the earth.

We then move on to Apollo 7 (Apollo 2-6 were unmanned testing flights) which launched in October 1968 and spent 10 days orbiting the Earth to test the rocket. Apollo 8 went further than ever before. On 21st December 1968, Apollo 8 launched and its target was the moon. They did 10 orbits of the moon before heading back to earth, the mission had been a success and landing on the moon was become ever closer.

Apollo 9 and Apollo 10 were test missions for testing out the space suits and the lunar module. The big one though, the Apollo 11 was launched in July 1969, this is the mission everyone remembers or has heard about. The three-man crew featuring Astronauts, Edwin ‘Buzz’ Aldrin, Neil Armstrong, and Michael Collins landed on the moon. The space race was complete and Kennedy’s vision had been completed – Although President Kennedy never got to see his idea in motion as he was assassinated in 1963.

These missions include those that came after that historic event, right up to Apollo 17 are written in depth in the book. There are plenty of photographs and transcripts of the conversations with the various astronauts. It was nice to actually learn something about the men who bravely went into space and to the moon.

If you love science, astronomy or have a keen interesting in space, then this book is for you. It is written in an easy to understand style and was intriguing. I can’t really say this is something that I have a big interest in but it definitely held me to the pages and had me poring over the pages for a few hours.

Rod Pyle has written widely about the history of space exploration and the inner workings of NASA. He is a consultant for NASA’s Jet Propulsion Laboratory and has worked at Caltech and the Johnson Space Center.

Rod has written for the Huffington Post, WIRED, space.com, LiveScience and many other science periodicals and websites. He is a frequent radio guest on major networks in the USA and UK. His other books for Carlton include Missions to the Moon and Mars: A Journey of Discovery.