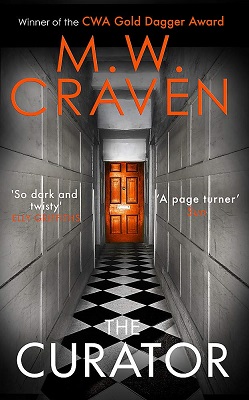 It’s Christmas and a serial killer is leaving displayed body parts all over Cumbria. A strange message is left at each scene: #BSC6

Called in to investigate, the National Crime Agency’s Washington Poe and Tilly Bradshaw are faced with a case that makes no sense. Why were some victims anaesthetized, while others died in appalling agony? Why is their only suspect denying what they can irrefutably prove but admitting to things they weren’t even aware of? And why did the victims all take the same two weeks off work three years earlier?

And when a disgraced FBI agent gets in touch things take an even darker turn. Because she doesn’t think Poe is dealing with a serial killer at all; she thinks he’s dealing with someone far, far worse – a man who calls himself the Curator.

And nothing will ever be the same again . . .

The third book in M.W. Craven’s Washington Poe series opens with brutal scenes of a woman tied down, barely conscious. She then has two of her fingers chopped off, one ante-mortem and one post-mortem. If this scene is too much for you then you might want to give the rest of the book a miss. If like me you love a good brutal thriller, keep reading.

It’s Christmas in Cumbria and Washington Poe and the team are called into the police station, there is a murderer on the loose. Three sets of pairs of fingers have been found in different locations all with a note stating #BSC6. Their identities are discovered but with only one body found and different methods of amputation used on each pair of fingers, National Crime Agency’s Washington Poe and Analyst Tilly Bradshaw have their work cut out, especially as the facts don’t seem to follow the usual serial killer script.

The pair are just starting to put small pieces together when Poe receives a phone call from a disgraced FBI agent Melody Lee who informs him he is dealing with someone like never before. The person they are looking for is The Curator. Poe needs to understand that no matter how many steps forward he takes The Curator will always be two steps ahead and he needs to tread carefully.

The Curator is one of the best thrillers I have ever read and in my opinion the best yet in the Washington Poe series. It is gripping, suspenseful, and certainly plays with your mind. It makes you think and there is most certainly a psychological element running the whole way through.

I love the way Poe and Tilly work together. Their banter is pure genius and realistic too. It is with this banter that you can find some light relief from this wicked case that takes Poe to new depths. Put it this way you should know you are up against something sinister when a senior pathologist is warning you to be careful and not be a hero.

Once I started reading this book I didn’t want to put it down. The pace was spot on, the chapters short and snappy and the mind games just perfect. I also love the location, as it is easy to visualise having been to Cumbria many times.

The book works as a standalone, so if you haven’t read the first two, no worries, though I will always suggest reading the first two first as it is best to begin a series at the start and The Puppet Show and Black Summer are both amazing books, so it would be foolish not to.

Overall, this is a tremendous book with a flawless plot that had me analysing every page. It is scary to believe that people like The Curator exist in the real world too. I’m off to lock all the doors and windows!!

M. W. Craven was born in Carlisle but grew up in Newcastle, running away to join the army at the tender age of sixteen. He spent the next ten years travelling the world having fun, leaving in 1995 to complete a degree in social work with specialisms in criminology and substance misuse. Thirty-one years after leaving Cumbria, he returned to take up a probation officer position in Whitehaven, eventually working his way up to chief officer grade. Sixteen years later he took the plunge, accepted redundancy and became a full-time author. He now has entirely different motivations for trying to get inside the minds of criminals . . .