The Day We Met by Roxie Cooper – Book Review

The Day We Met by Roxie Cooper – Book Review 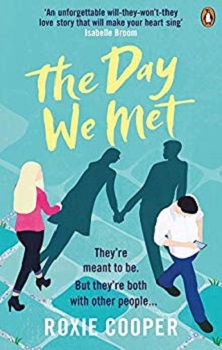 The Day We Met

Stephanie and Jamie are meant to be. The problem is they’re both with other people…

Stephanie doesn’t believe in fate, true love or living happily ever after. She’s content enough being engaged to Matt. But then she meets Jamie, who understands her more than anyone else ever has.

Jamie is happily married to his childhood sweetheart Helen and believes in everything Stephanie doesn’t. So why does he have such a strong connection with Stephanie?When Stephanie and Jamie meet one fateful weekend in 2006 it will change everything…

The Day We Met by Roxie Cooper is an epic tale of two people whose love has spanned over a decade. The story begins in 2006 with Stephanie and Jamie meeting at an Art and Photography retreat weekend where an instant connection is formed between them. The problem is that both of them already have partners. Stephanie is engaged to Matt, Jamie is married to Helen.

Being a romantic at heart I just love a good romance story and this book ticked all the boxes. I also loved all the art and music references throughout which play an important part of the plot.

The main characters, Stephanie and Jamie are so superbly written that they come across perfectly realistic. I also felt for their partners as these two people over the course of a decade met up in secret, but as friends, at first yearly, and then more often. They both knew that their connection to one another was strong, they also knew that they had their families to think of too.

The book is executed perfectly with all the highs and lows of life examined. The plot unfolded steady and at a good pace. There were lots of my favourite chapters, but chapter thirty certainly gave me the feel-good factor. I felt every possible emotion reading this beautiful book and needed the tissues, on several occasions.

An excellent page turner which had me reading very late into the night as I was unable to put it down and the unpredictable ending just added so much more to this novel.

Well done Roxie Cooper a first class read and I will definitely be recommending this book to all who love romances novels. I now Look forward to reading more from this author.

Roxie was born and raised in Middlesbrough.

After studying Classics at Newcastle University, she realised she needed a break from studying Latin, Ancient Greek and all that serious stuff, so naturally, she became a dancer in a nightclub (à la Coyote Ugly) for a few years before going to live in Australia. Upon returning to the UK she became a criminal barrister for 7 years.

It was after constantly being told “Oh! You don’t look like a barrister!” that the idea for her debut novel was born.

Roxie lives in Yarm, a pretty little market town in the North-East. She’s a bit (lot) obsessed with Prince and spends far too much time watching him on YouTube. Her hobbies include watching musicals, making her hair as big as possible, and wishing she was Buffy the Vampire Slayer.