The Diary of a Serial Killer’s Daughter by L.A. Detwiler – Book Review

The Diary of a Serial Killer’s Daughter by L.A. Detwiler – Book Review 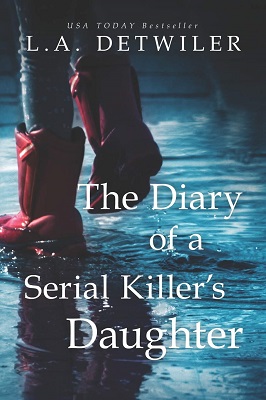 The Diary of a Serial Killer’s Daughter

“There’s something very wrong with Daddy…” Ruby Marlowe’s mother died when she was two, and her single father has ensured she has everything she needs. However, everyone has dark secrets, and Ruby’s father is no exception…

When she’s young, she doesn’t understand the weight of her father’s killing game. After she begins to investigate her mother’s life and death, however, Ruby starts to believe there are some secrets even she doesn’t know about the serial killer she calls Daddy. As her father’s killing grows rampant, the secrets get harder and harder to hide—and she fears it will all come crashing down.

Will Ruby seek a different life for herself and betray the only person who has ever loved her, or will she get wrapped up in his sinister path?

The Diary of a Serial Killer’s Daughter is written in the format of a diary written by a girl between the ages of 7 and 16, her father is an escalating serial killer that hides his true nature from everyone, including Ruby, his daughter.

Ruby is neurodivergent, though the specifics are never revealed, which makes the story even more interesting because we see everything through her eyes without any preconceived ideas about why she reacts the ways she does. She’s obsessive, doesn’t experience much empathy and struggles to build relationships with other people – we never know if that’s something she has in common with her father.

The book is very dark and not for the faint of heart, it contains a lot of graphic and gruesome imagery of murder and reads as a true crime novel from the perspective of an unreliable witness. I was expecting something YA as the protagonist is a child, but this most definitely isn’t for younger readers.

The story is a study on nature v. nurture, with a dash of mystery and a whole load of psychological suspense and horror. It was a bit blunt for my tastes and could have benefited from a more subtle approach to these things – leaving more for the reader to mull over at the end.

One of the main issues for me was that, as this book is written as Ruby’s diary, her dislike of everyone around her apart from her serial murderer daddy meant that none of the characters were likeable and her apathy was infectious in places.

I enjoyed this book for it’s shock factor and the gruesome scenes, as well as the diary format which is something I always get a kick out of!

L.A. Detwiler is a USA TODAY bestselling author and high school English teacher from Hollidaysburg, Pennsylvania. During her final year at Mount Aloysius College, she started writing her first fiction novel, which was published in 2015. She has also written articles that have appeared in several women’s publications and websites. L.A. Detwiler lives in her hometown with her husband, Chad. They have five cats and a mastiff named Henry.

Her debut thriller with Avon Books/HarperCollins, The Widow Next Door, was a USA TODAY Bestseller. The One Who Got Away releases February 19th with One More Chapter/HarperCollins, and The Diary of a Serial Killer’s Daughter releases March 12, 2020.

What did you think of The Diary of a Serial Killer’s Daughter? Share your thoughts in the comment section below!