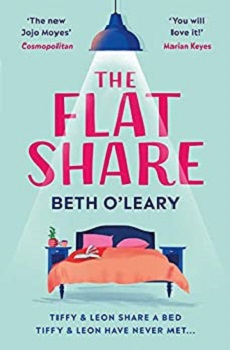 Tiffy Moore needs a cheap flat, and fast. Leon Twomey works nights and needs cash. Their friends think they’re crazy, but it’s the perfect solution: Leon occupies the one-bed flat while Tiffy’s at work in the day, and she has the run of the place the rest of the time.

But with obsessive ex-boyfriends, demanding clients at work, wrongly imprisoned brothers and, of course, the fact that they still haven’t met yet, they’re about to discover that if you want the perfect home you need to throw the rulebook out the window…

Publisher of DIY books Tiffany (Tiffy) has been staying with her despicable ex-boyfriend Justin since they split-up and is desperate to find a new home. Unfortunately, with the prices in London, she is struggling to find something decent on her pay.

Palliative care nurse Leon needs to find an extra £350 a month to pay his brother’s solicitor as his brother Richie has been imprisoned for a crime he didn’t commit and is appealing. Leon comes up with the idea to advertise for a flatmate, though with his flat being a one-bedroom flat the newcomer will have to share the bed.

Leon works nights and stays at his girlfriend Kay’s house of a weekend, so with the flat being available 6pm-8am every weekday and all weekend Tiffy things it is the ideal place for her, though her friends are not so sure on the bed sharing part.

Tiffy and Leon have never met, not even to sort out the living arrangements. They communicate via text and post-it-notes. But with break-ups, harassment, prison appeal, horrible bosses, and sick patients. The two might find they need each other more than they realise.

The Flatshare was one of those books which you begin thinking it will be an easy, painless read that will pass the time, and whilst yes it is, it is so much more too. I’d go as far as to say it is one of the best books I have read this year (and I’ve read a lot of books).

The two main characters are not perfect, they are like you and me, they have their good parts and their flaws. Tiffy is a fiery red-head. She turns people’s heads wherever she goes and yet she doesn’t notice as she doesn’t see herself in that light. Her ex has psychologically abused her so much that she is suffering and needing to see a councillor about her flashbacks and memories which keep on surfacing. Also not helped by the fact Justin has started turning up in random places where Tiffy is.

Leon has a lot on his plate. He is trying to help his brother Richie, deal with an overbearing girlfriend who tries to dictate his life. At work, he looks after dying patients including an elderly gentleman who would like to find his first love and Leon volunteers to help.

What I loved about this book was that is was raw and had some hard-hitting issues and whilst they were dealt with using a lot of compassion, there were also lots of hilarious moments to keep you smiling too. I adored the notes the two left for one another and I would happily have read a book just filled with their back and forth post-its.

The pace was just right and the chapters were short. It is even written in the style I hate most in books, dual point of view, and yet it didn’t bother me one bit as I always knew whose head I was in and the storyline was that strong that it just didn’t matter to me.

Overall, I read this book in two sittings as I didn’t want to put it down. It had everything I love in my reads, including the perfect epilogue too.

Beth studied English at university before going into children’s publishing. She lives as close to the countryside as she can get while still being within reach of London, and wrote her first novel, The Flatshare, on her train journey to and from work.

You’ll usually find her curled up with a book, a cup of tea, and several woolly jumpers (whatever the weather).