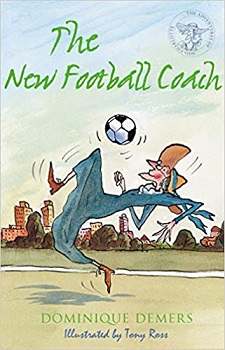 Miss Charlotte – the new coach of a children’s football team – has some odd methods to prepare them for the big match, including talking to the ball and drinking a special potion, smalalamiam. Also, she teaches them how to lose! And to have fun. Incredibly, it seems to work – but will their hopes of victory be dashed when their star player decides to join the other team?

The latest instalment in Dominique Demers’s popular Adventures of Miss Charlotte series, The New Football Coach, brilliantly illustrated by Tony Ross, is a marvellous tale about believing in yourself and beating the odds.

The New Football Coach is the third book in The Adventures of Miss Charlotte series by Dominique Demers. I have recently reviewed the first two in the series, ‘The New Teacher’ and ‘The Mysterious Librarian’. They are a cross between Roald Dahl’s wacky books and Mary Poppins.

At first, the students are not sure of Miss Charlotte’s teaching techniques especially when their first lesson is how to lose, plus she also talks to her football which she has named Anatole. The children soon learn that although they want to win the game they must first learn to enjoy themselves and work as a team, but the best footballer on the team isn’t happy and so he leaves and joins the rival team.

Can Miss Charlotte help the team to win their most important game?

Being the third book in a series I have the two previous books to compare this book to and whilst it was fun and enjoyable I don’t think it was as good as the previous two. Miss Charlotte didn’t seem her usual eccentric self in this book. Yes, she might have taught the children to talk to their footballs and give them a name and to drink a made up potion called Smalalamiam but she was mainly completely normal and I’ve come to love the wacky side of Miss Charlotte.

Once again, like the previous books, the author does a great job at teaching children life lessons through her fictional stories. This time it’s about friendship, working together and getting along. Lessons all children need to learn.

Up to now, there are no more books in the series which is a shame as I have been enjoying them. Hopefully, more will be written and published in the future.

For twelve years, she was a journalist for the magazine Châtelaine and the magazine l’Actualité, and she writes for the newspaper Le Devoir. She has also produced various documents for television and radio.

The novels of the Charlotte youth series were used to develop the screenplays of the films The Mysterious Miss C. and the Incomparable Mademoiselle C. Moreover, in 2005, she put in scenario A winter of turmoil for a televised soap opera.