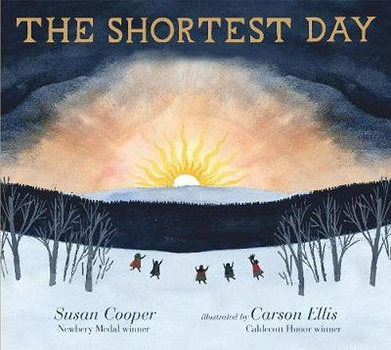 So the shortest day came, and the year died…

As the sun set on the shortest day of the year, early people would gather to prepare for the long night ahead. They built fires and lit candles. They played music, bringing their own light to the darkness, while wondering if the sun would ever rise again…

Written for a theatrical production that has become a ritual in itself, Susan Cooper’s poem The Shortest Day captures the magic behind the returning of the light, the yearning for traditions that connect us with generations that have gone before – and the hope for peace that we carry into the future.

Richly illuminated by Carson Ellis, this beautiful book evokes the joy and community found in the ongoing mystery of life when we celebrate light, thankfulness, and festivity at a time of rebirth. Welcome Yule!

The Shortest Day is a children’s book all about the Winter Solstice and is based on a poem by author Susan Cooper which is recited every year on Revels Stage in nine different American cities.

The poem itself is lovely and the illustrations although a little dark really brings the story to life, however, I feel that the poem is more for adults than for children as it comes across as if it might be a little confusing for younger readers.

At the back of the book, there is an explanation about the poem which again has been written as if it is for an adult reading it not a child.

Whilst I think the book looks beautiful I just don’t believe that the majority of children will understand the meaning, especially not in the UK where the Winter Solstice is rarely celebrated. Until the explanation, at the end, there is no real reference to what the shortest day is, when it happens, why it comes about. Such a shame as it could have been an amazing book if only the explanation for the shortest day was more prominent.

Susan Cooper is the author of the classic five-book sequence The Dark is Rising, which won a Newbery Medal, a Newbery Honor Award, and two Carnegie Honor Awards. Born in England, she was a reporter and feature writer for the London Sunday Times before coming to live in the United States.

Her writing includes books for children and adults, a Broadway play, films, and Emmy-nominated screenplays. Her most recent books for children are King of Shadows and Victory, and for adults a portrait of Revels founder Jack Langstaff called The Magic Maker.

In 2012, Susan was given the Margaret A. Edwards Award and in 2013 she received the World Fantasy Award for life achievement. Her children’s novel Ghost Hawk was published in 2013. Susan lives and writes in Marshfield, Massachusetts.