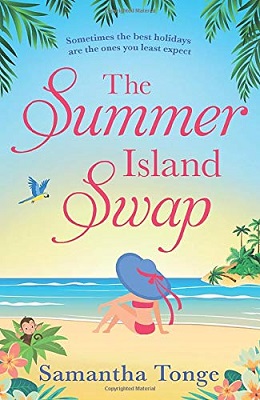 Sometimes the best holidays are the ones you least expect…

After a long and turbulent year, Sarah is dreaming of the five-star getaway her sister has booked them on. White sands, cocktails, massages, the Caribbean is calling to them.

But the sisters turn up to tatty beaches, basic wooden shacks, a compost toilet and outdoor cold water showers. It turns out that at the last minute Amy decided a conservation project would be much more fun than a luxury resort.

So now Sarah’s battling mosquitos, trying to stomach fish soup and praying for a swift escape. Life on a desert island though isn’t all doom and gloom. They’re at one with nature, learning about each other and making new friends. And Sarah is distracted by the dishy, yet incredibly moody, island leader she’s sure is hiding a secret.

Sarah has been dreaming of going on holiday for years but with work, looking after her younger sister Amy and no spare cash that dream has never come true, that is until Amy wins some money on the lottery and declares she is taking them both on a five-star luxury break.

Sarah didn’t want her sister to spend all her money on a holiday but was looking forward to being pampered for two weeks, especially as she has just been sacked from her hospitality job.

Amy though has a secret, she decided to swap their holiday at the last minute. They are going to spend their time abroad on an island that was hit by a Hurricane and needs a lot of work doing to it. No five-star hotel rooms, more wooden shacks without aircon. Sarah is livid but she doesn’t want to let Amy down, so she is going to have to muck in and clean toilets, rescue turtle eggs, and make pathways in her fancy clothes and manicured nails.

There is one ray of hope though, the gorgeous man who loves on the island, now he is worth staying for, isn’t he?

Can you imagine getting all excited about your first holiday in years and after pampering other guests in your joy you can’t wait for someone to be pampering you? You have your hair cut, nails manicured, pack your fancy clothes, and your heels and then turn up in a place with no running water, a compost toilet, no shops, or even proper roads. The place feels like hell on earth to you but you have to put a brave face so as not to destroy your little sister’s happiness who is all excited about a working holiday.

Sarah is a very likeable woman who has always tried to do her best for her younger sister after what happened in their past with their father. She is hardworking and although the situation isn’t ideal and at first wants to leave right away, she realises she has to knuckle down and get on with things and maybe that the place isn’t that bad, nor are the other guests or the grandson of the owner.

The book moved at a nice pace and kept me entertained throughout. As well as the human characters there were some animals too, including a blind monkey that had been rescued from being forced to perform on the streets.

The plot is so full-on that it felt like the guests never stopped trying to fix up the island. The romance aspect was nicely handled, though, I do feel that the book would have even worked as a great read without a romance within it.

Overall, The Summer Island Swap is a wonderful summery read that is pure escapism. It is enjoyable and realistic too. I’m not sure I would have stuck around, I think I might have been on the first boat out of there!

Samantha Tonge lives in Manchester UK with her husband and children. She studied German and French at university and has worked abroad, including a stint at Disneyland Paris. She has travelled widely.

When not writing she passes her days cycling, baking and drinking coffee. Samantha has sold many dozens of short stories to women’s magazines.

She is represented by the Darley Anderson literary agency. In 2013, she landed a publishing deal for romantic comedy fiction with HQDigital at HarperCollins. In 2015 her summer novel, Game of Scones, hit #5 in the UK Kindle chart and won the Love Stories Awards Best Romantic Ebook category. In 2018 Forgive Me Not, heralded a new direction into darker women’s fiction with publisher Canelo and in 2020 her novel Knowing You won the RNA’s Jackie Collins Romantic Thriller Award. 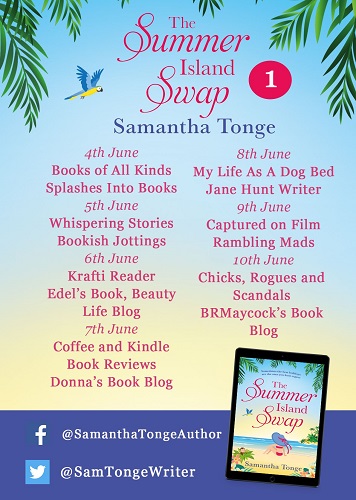 What did you think of The Summer Island Swap? Share your thoughts in the comment section below!