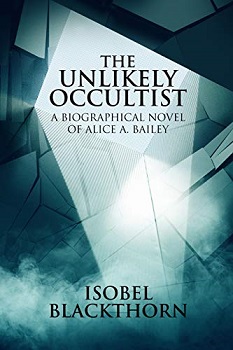 The Unlikely Occultist
A Biographical Novel of Alice A. Bailey

Discover the fascinating life of Alice Bailey: a long-forgotten occultist widely regarded as the Mother Of The New Age.

Back in 1931, Alice is preparing to give a speech at a Swiss summer school. Soon after, she is put on Hitler’s blacklist. What Alice doesn’t realize is the enormity of her influence to the world, and the real enemies who are much closer than she thinks.

A dynamic and complex figure, Alice Bailey’s reach was huge. She was influential among people and organizations of global power, including the United Nations. Yet today she is maligned by fundamentalist Christians, Theosophists, Jews, academics and above all, by conspiracy theorists.

Are any of these groups justified in rejecting the unlikely occultist?

Before being asked if I would like to join the blog tour for this book I will admit that I had never heard of Alice Bailey. I also didn’t realise it would be a biographical novel as that bit had been left off the synopsis. Had I known I most likely would have turned the book down as I hate biographies so I entered the book a little bit cautiously and not expecting to enjoy the story, however, I glad to say was wrong.

The book is set in two periods, present-day with Heather Brown a librarian and the past with Alice Bailey beginning when she was just a young child and into her adult life.

In the present Heather has been going through some old records at the Victoria State Library, Australia and comes across work by late Professor Samantha Foyle which talks about Alice Anne Bailey. She is intrigued by this woman and wants to know more about her. She is drawn into Alice’s world and finds coincidences that make her more determined to find out all she can about this woman. As well as her research Heather’s private life is complicated.

Alice Bailey is a woman who not only wanted to learn, she believed in global peace and spiritual belief. She was also a novelist who wrote books on Theosophy. She had many followers and wealthy friends, but her look on life and the future and the spiritual world also gained her a few enemies too, including Hitler. She was a woman who stood up for what she believed in and in the 1920s and 30s this was a very brave thing to do.

The book is a fictional account of Alice Bailey who lived between 1880 and 1949. She was a writer, teacher, believer, and mother. Heather is a fictional character. The two stories set in these two periods interweave and it was interesting to get to know about a woman that was a big part of the past yet most won’t ever of heard of her.

I found myself flying through the pages and intrigued by the whole plot, so much so that I went on to learn about Alice Bailey and her real life. She was a fascinating woman and you should look her up.

Isobel Blackthorn is a prolific novelist of unique and engaging fiction. She writes across a range of genres, including psychological thrillers, gripping mysteries, captivating travel fiction and hilarious dark satire.

Isobel holds a PhD in Western Esotericism for her ground-breaking study of the texts of Theosophist Alice A. Bailey. Her engagement with Alice Bailey’s life and works has culminated in the biographical novel, The Unlikely Occultist. 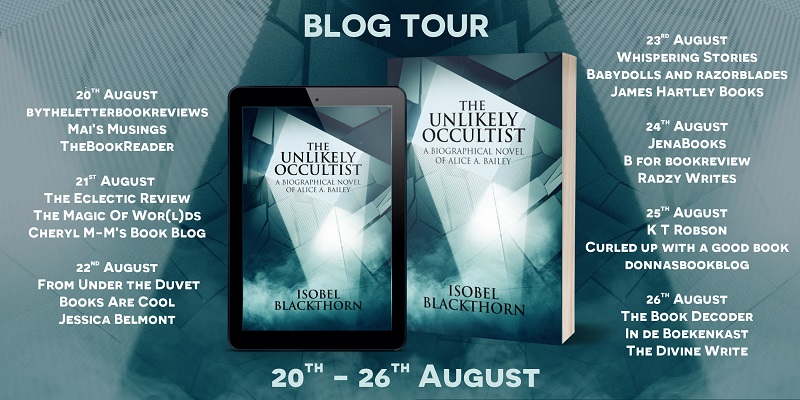