The Writing Life of: Alice Castle

This week I am thrilled to be interviewing author Alice Castle. Alice will be sharing with us details of her writing life, telling us all about her latest book ‘The Perfect Widow‘, which was released on 15th November 2019 and answering a few fun questions too. This post contains affiliate links.

Before turning to crime, Alice Castle was a UK newspaper journalist for The Daily Express, The Times and The Daily Telegraph. Her first book, Hot Chocolate, set in Brussels and London, was a European hit and sold out in two weeks.

Death in Dulwich was published in September 2017 and was the first in her London Murder Mystery adventures. It was a number one best-seller in the UK, US, France, Spain and Germany. The series has had rave reviews and Alice has just published the seventh book, The Slayings in Sydenham, as well as her new crime novel, The Perfect Widow, under the name A.M Castle.

Alice lives in south London and is married with two children, two step-children and two cats.

I always wanted to be a writer. I used to make tiny magazines for my dolls. I found one recently, it was called Good Mousekeeping, about the size of a matchbox, and had lots of recipes for cheese ☺

My favourite author was C.S. Lewis. I remember reading The Horse and His Boy (from the Narnia series) and it was the first time I was totally gripped by a book. I never wanted the story to end.

I also loved E. Nesbitt (Five Children and It etc) and The Secret Garden by Frances Hodgson Burnett, and Anne of Green Gables Lucy Maud Montgomery and Little Women by Louisa May Alcott. The Just William books (by Richmal Crompton) were brilliant too, and so funny. I was very lucky to have had easy access to a public library which was stuffed with great books.

I had a fantastic teacher when I was only about five who praised the way I had written something. She was so kind. Teachers can have such an enormous influence. That little extra bit of care and attention from her made me feel there was something I was good at. I really credit her for giving me the confidence to write.

I have a love/hate relationship with writing, I have a compulsion to do it but at the same time would sometimes prefer to do anything else. So I have lots of routines to trick myself into settling. They include a series of bits of admin I go through before starting, an especially pretty teacup I drink my favourite tea from while I’m writing, and a very strict word count I have to accomplish before I can do anything else.

I’ve written nine and a half books now. Eight are in print, one is coming out next month (The Slayings in Sydenham, number seven in my London Murder Mysteries series). I’m just about to finish my second psychological thriller which will be out next year.

I’m a plotster, or a pantser – I try everything. Every book is done differently, in an effort to find the perfect recipe. After almost ten I’m beginning to think there may not be one… I used to just write out the beginning, middle and end but that has evolved into a chapter plan, which I usually ignore after chapter three. 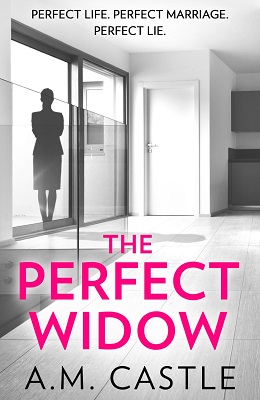 So when PC Becca Holt arrives to break the news that Patrick has been killed in an accident, she thinks Louise’s perfect world is about to collapse around her.

But Louise doesn’t react in the way Becca would expect her to on hearing of her husband’s death. And there are only three plates set out for dinner, as if Louise already knew Patrick wouldn’t be home that night…

The more Becca digs, the more secrets she uncovers in the Bridges’ marriage – and the more she wonders just how far Louise would go to get what she wants…

Is Louise a loving wife – or a cold-hearted killer?

The book I’m writing at the moment is a psychological thriller and the great thing about them is that there is very little police procedure involved. No endless Googling of arcane bits of law, which is lovely. There’s not even a lot to worry about on the post mortem front or murder method front which is quite liberating after writing seven whodunits with increasingly complicated plots. On the other hand, I’ve had to spend a lot of time inside the heads of some very odd people, so it hasn’t all been plain sailing.

The very first glimmering of an idea for the story came upon me about a year ago – and I haven’t written the last word yet!

The book has a working title but because I’m with a big publisher (HQDigital, an imprint of HarperCollins) they will come up with the final title. I’m quite relaxed about this; they came up with such a brilliant title for my first psychological thriller (The Perfect Widow).

My characters tend to be ordinary people who are in extraordinary situations – I’m always fascinated to see what people will do when they are under terrible stress, and how far they will go to protect the lives they love. Having said that, no one is really ordinary. We all have secrets, we all tell lies. What happens when we are found out? That’s the interesting bit.

It’s not easy getting a book published. My first novel was rejected loads of times before being published, to my surprise, in German, a language I don’t even speak. Since that first time I’ve been really lucky in that I found a publisher for my series after only three submissions. I was then invited to try psychological thrillers by an editor and I was really thrilled and completely over-excited when HQDigital decided to publish it.

I’m hoping to continue both my writing genres – cozy crime for Darkstroke with the continuing adventures of my single mum amateur sleuth, Beth Haldane, in the London Murder Mysteries, and then psychological thrillers for HQDigital. These will be twisty domestic noir suspense novels about the darker reaches of the mind.

When my children used to ask me this, I always said I’d have a tail. They insist that’s not a power but I think mine would be very powerful – and fluffy like a squirrel’s.

I have two cats, Pushkin, a haughty calico cat and Blackjack, a rescue cat from Battersea Cats’ Home who is the sweetest boy in the world.

‘Don’t Try This At Home’

I’d be one of the mummies in the background at the coffee shop in Dulwich, listening in on my amateur sleuth Beth desperately trying to solve her latest case.

‘Which one of us is quackers?’

I would like to say a big thank you to Alice Castle for sharing with us details of her writing life and for a wonderful interview.