The Writing Life of: Julie Haiselden

Today I have the honour of interviewing author Julie Haiselden about her writing life, and about her latest book, Evil Echoes which was released on the 31st October 2016 .

So without further ado, say hello to Julie.

I have now achieved a long held ambition to become a published author!

My jumbled thoughts of backdrops, plots and characters kept intruding into my life in such a way that I felt I had to breathe life into my ideas by assembling them in order and then putting them into print.

As a budding writer there have been unforeseen problems along the way.

1. Studying people rather too intently if they have traits that may possibly warrant inclusion in a story.
2. Losing track of time and finding the minutiae of life inconvenient when it interferes with thought processes.
3. Blurring the lines between reality and fiction and accusing long-suffering partner of misdemeanours committed by characters.

I very much hope you enjoy reading Long Shadows and my new novel Evil Echoes (a Victorian prequel).

I wrote my first short story when I was about ten I think and always wondered if I could write a novel but career, family and mortgage got in the way until recently.

My youngest child encouraged me to complete my first novel and critiqued every chapter as it rolled off my laptop into his in-box. When it was finished he insisted I send the synopsis and three sample chapters to a publisher to see if it had legs. The publisher liked the concept and after seeing the full manuscript, offered me a contract.

I read across many genres and enjoy the work of a myriad of authors. If I have to pick a few, I would say Philippa Gregory, Patricia Cornwell and of course the queen of crime herself, Agatha Christie. I read ‘The Murder of Roger Ackroyd’ when I was eleven and remember being awestruck that anyone could think up something so clever yet make it so easy to read.

No, I can’t work to a set timetable. If I’m into a story I will write nonstop to the point that I’m more or less stuck in position. Sometimes if it’s cold, I realise I haven’t moved for several hours when my feet go numb and I start to shiver. Also being a part-time insomniac, when I wake in the night, I paddle along to the study and work for several hours in the stillness of night.

If losing track of time and forgetting to make the dinner could be called a strange habit or ritual, then yes! Otherwise, I don’t think so. However I am guilty of checking social media rather too often if I’m editing, with brioche and coffee breaks being frequent.

Laptop for the manuscript but when I’m checking that my timelines work, I resort to notepad and pen.

I do have a very soft spot for the Victorian police inspector, Albert Bishop, in my latest book. I started to write him as a middle-aged rather bumbling character however within a couple of pages of his arrival, I realised he was mid-thirties and as sharp as a razor which necessitated a bit of a re-write of some earlier scenes. He rather grew on me after that.

I have to have a rough idea of the plot outline but once I start to write, things don’t always turn out as I wished and sometimes my characters do things that are right for them but make me unhappy.

I had a reader contact me recently to say she did not anticipate the ending of ‘Long Shadows’ to which I had to confess that I didn’t either until my fingers were flying over the keys and I’m shouting, ‘don’t do that’ at my character, to no avail. Once I read it back, I saw that the book really could not have ended any other way. 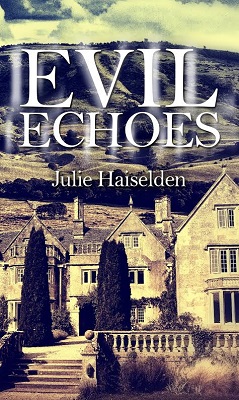 Lizzie Tester works for the Knightley family. She has risen through the ranks having started in the laundry and is now a lady’s maid. She has been asked to accompany the Knightley family from their main home in Kent to their holiday property, Highfields House in the Lake District.

Ever since Lizzie arrives she cannot shake an uncomfortable feeling about the place but once strange things start happening Lizzie starts to believe that there is more to this feeling than she first suspected. It isn’t long before people start dying and Lizzie is caught in the middle. What is happening and how are these deaths connected?

From ideas to publication was about eighteen months in total.

No, thankfully once I started to write ‘Evil Echoes’ the story flowed very well and I completed the first draft in six weeks but did very little else in that time; we ate a lot of takeaways!

My lead character is based on a combination of my great-aunt, Elizabeth Kealey and her mother, Catherine Tester, both of whom were in service. So my lead character is called Lizzie Tester. Most of my characters have names of my ancestors, jumbled to preserve anonymity.

(Photograph of my great-aunt, Lizzie Kealey, taken in her mid-twenties) 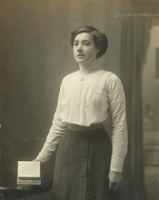 In this novel, my main protagonist starts life in a small cottage on the Westden Chase estate in Kent and we join her at the age of thirteen. She is intelligent but perhaps a little naïve in her outlook on life. She is a loyal daughter to her ailing mother and works hard in her job as she makes her way up the below-stairs hierarchy from laundry maid to lady’s maid.

I appreciate that big names pull audiences so from a financial viewpoint, I suppose a couple of well-known stars might sell the film however, I would like to see some new actors bring my characters to life; if they did become successful it would forever be my work that they were originally associated with.

My youngest child read my first book ‘Long Shadows’ while he was a student but now his career is flourishing he no longer has time so my longsuffering husband reads my manuscripts; if they do not get his seal of approval, they are do not see the light of day.

Other Books by Julie

Lizzie Tennyson, loving wife and mother, loyal to her husband and prepared to sacrifice her nursing career to allow him to follow his dream to run a country pub and restaurant miles away from southern England where they lived, leaving behind their friends and family.

Surprising herself, Lizzie comes to love their life owning and running the Blenthorne Inn in the Lake District. And in turn the villagers and regulars take her to their hearts. Life for the Tennysons seems to be perfect. However, shadows from the past break in on the present and Lizzie’s life suddenly becomes less than perfect.

As she tries to hold herself and her family together, she is ready to take desperate measures which complicate her life even further. She is finally overwhelmed, but even in her lowest moment she is still the perfect friend, ready and willing to help others. But is Lizzie all she appears to be? She has a different side to that which she normally portrays to her family and friends. Which one is the real Lizzie?