This week on ‘The Writing Life of:‘ I am thrilled to be interviewing author Margaret K Johnson. Kerry will be sharing with us detail of her writing life, telling us all about her latest book ‘Taming Tom Jones‘, which was released on 2nd October 2015 and answering a few fun questions too.

Margaret K Johnson began writing after finishing at Art College to support her career as an artist. Writing quickly replaced painting as her major passion, and these days her canvasses lay neglected in her studio.

She is the author of women’s fiction, stage plays and many original fiction readers in various genres for people learning to speak English.

Margaret also teaches fiction writing and has an MA in Creative Writing (Scriptwriting) from the University of East Anglia. She lives in Norwich, UK with her partner and their bouncy son and dog.

I started writing fiction after I finished art college, with the very misguided idea that if I wrote a best-selling romantic novel, it would finance my career as an artist.

I got the bug, and even when that particular novel was rejected, I carried on writing, and gradually writing replaced painting as my major passion. So it sort of happened by accident, but I would say that it wasn’t until around five years later that I finally accepted that I was a writer.

As I’ve said, I started out writing romantic fiction, with a view to getting published by Mills and Boon.

My first novel wasn’t accepted by them – and in fact, nothing else I wrote afterwards was either! I guess we’re not a good match. But my second and third novels were published by Women’s Weekly in a paperback series, and then I had met someone who wrote fiction for people learning to speak English, published by Cambridge University Press, and decided to have a go at that.

I’ve had lots of these published now, which is great, but around four years ago I decided to finally write exactly the type of book I enjoy reading – women’s fiction with a touch of romance, but about women who are overcoming challenges and emerging triumphant and confident. They are roller-coaster stories about dealing with the messiness of life, and I like to think that my characters become the reader’s friends, and that the reader really roots for them while they’re reading the book.

I love Cecelia Ahern, Lucy Dillon and also some of Adele Parks’ novels.

Writing has to be fitted in around teaching – I established WriteUP Creative Writing Courses earlier this year – and also the school run for my ten-year-old son, but when I’m writing, I love to start early in the morning – around five-thirty, writing in my notebook with a giant cup of coffee by my side.

Then, after the school run, I type this up and continue writing on the computer until lunch time. I take the dog out, have a cat nap, then do another hour on the computer before I have to collect my son from school. 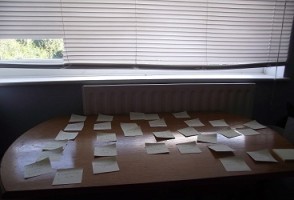 I write in my notebook and straight onto the computer.

Oh, that’s a difficult one. I love all my main characters for different reasons – I really admire the way they’ve dealt with life.

There’s Kate, who is so bitter at the start of ‘The Goddess Workshop‘ because of the treachery of her ex-husband, but who transforms herself during the novel. There’s Reenie, who needs to finish grieving for her son before she can move forward in life. Emma, who has taken the courageous decision to end her safe, boring relationship and needs to find the courage of her convictions…

But I think, since she’s in my very latest book, I’ll choose Jen from ‘Taming Tom Jones’, because she makes such a courageous choice at the start of the book. She’s determined to save her relationship, come what may, and I think a lot of women will empathise with her dilemma.

I know my characters thoroughly when I start, and I know what happens in the beginning. I know the ending, and a few touch stones along the way.

After I’ve written about 20,000 words, I pause and plan more thoroughly, using post-it notes to have a good brainstorm, then putting these into some kind of order.

The plan changes as I write, although the ending is rarely different to the one I originally decided upon. 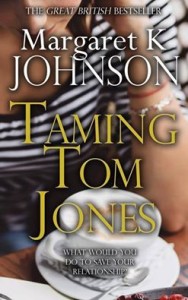 Jen’s partner Michael has never been in a relationship for more than four years, so with their fourth anniversary coming up, she’s getting understandably nervous. Especially as she’s just discovered she’s pregnant, and she knows Michael doesn’t want any more children other than Kyle, his teenage son.

Jen means to tell Michael about the baby right away, but then he comes home on a brand new motorbike, having traded in his sensible car, and the moment is lost. Is Michael having an early mid-life crisis?

Jen decides to do some detective work about Michael’s exes in an effort to save their relationship, and embarks on a journey that will take her as far afield as North Norfolk and Cuba. But she has no idea of the can of worms she’s about to open.

Why do all Michael’s relationships break up? And what’s the big secret he’s hiding?

Ooh, this one took quite a long time, all-in-all, because I started to write it quite a while ago, but when I had the idea for it, it was absolutely the wrong time to be writing it, because I was in the middle of an MA in Scriptwriting at the University of East Anglia, and I needed to be working on my dissertation. So I had no choice but to put TTJ aside.

Then I had my son, and when I went back to work, it was easier to work on my language readers for people learning to speak English, because they were shorter.

For these reasons, it was quite a few years until I returned to ‘Taming Tom Jones’. Then it only took about four months to finish, and it was accepted by Crooked Cat Publishing about a month after I submitted it to them.

I don’t think so, no. Sometimes I find I need to put something away for a while to let it brew – in fact, I always do this when I’ve finished a first draft of a novel. But then I can get back to it relatively easily after a little space.

I’ve no idea! They just came into my head and were right! Jen and Michael meet at a fancy dress party with a theme of Pop Icons of The Twentieth Century when she is Madonna and he is Tom Jones, hence the title!

I don’t have strong ideas about this one – I’d make sure I trusted the director and leave it to them!

I have two amazing beta readers – Ann and Juli – who read everything I write. I met these two wonderful women on the now defunct Authonomy website, and we really help each other because we’re on the same wavelength writing-wise. Thank goodness for the Internet, since one is in the USA, and the other in Australia!

For ‘Taming Tom Jones’, I also had a third beta reader – Shani – who is another Crooked Cat author, and her input was as valuable as Ann and Juli’s. I’m blessed!!!