The Writing Life of: Matt Dunn

This week on ‘The Writing Life of:‘ I am thrilled to be interviewing author Matt Dunn. Matt will be sharing with us detail of his writing life, telling us all about his latest book ‘A Christmas Day at the Office‘, which was released on 11th October 2016 and answering a few fun questions too.

So without further ado, say hello to Matt. 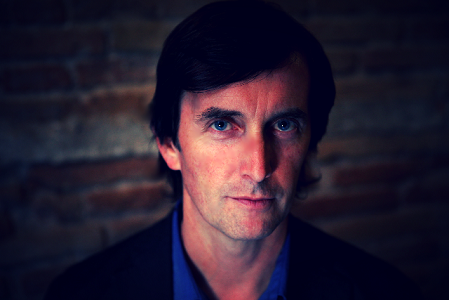 As well as ten novels, I’ve also written about life, love, and relationships for the likes of The Times, Guardian, and The Sun, along with a number of magazines including Cosmopolitan, Company, Elle, and Glamour.

I was twelve, and every week at school, one of us would be chosen (i.e. picked on) by one of the teachers to write a report of the cricket/rugby/hockey game we’d played the previous week, which we then had to read out in front of the whole school during assembly.

Typically, these tended to be dull affairs (“they scored, then we did, then they scored again…”), demonstrating all the imagination and literary flair you’d expect twelve year olds to have, so when it finally came to my turn, I thought I’d try to liven it up a little by putting a couple of jokes in (I’d repeat them now, but of course, you had to be there. And twelve.)

To my amazement, I got a few laughs, and there and then I decided I wanted to be a comedy writer. Of course, in retrospect, those laughs might have been because my flies were undone, but even so, the effect of the laughter was hypnotic.

The only problem for this budding comedy writer was what kind of comedy to actually write, so I decided I might as well get a job (i.e. a ‘proper’ job, as my mother-in-law calls it, as opposed to making stuff up in the hope someone might buy it), and put the writing on the back-burner until I figured that out.

Years later, I was on a skiing holiday, and a friend gave me a copy of Nick Hornby’s High Fidelity. I read it almost in one sitting – it’s still my favourite book – and there and then knew that that was what I wanted to write. Of course, actually writing that would have been pointless (mainly because Nick Hornby had already written it), but I reasoned that surely something like it wouldn’t be beyond me, so I decided I’d give it a go (ten novels later, I’m still trying!).

I wrote my first novel, Best Man, while taking a break from my job as an IT Recruitment Consultant, then went through the usual depressing cycle of rejection letters from agents and publishers (thirty-one of them, I think), but for every nine ‘thanks, but no thanks’ replies, there was one that gave me a hint or tip about how I might improve the book. I tried to incorporate their advice, re-wrote, kept on submitting, and eventually found an agent prepared to take me on. He in turn found a great editor who liked it, and offered me a two-book deal. Which rather shocked me, because I didn’t realise I’d have to write another one.

Nick Hornby. Partly because High Fidelity represents the absolute highest level of perfection in my genre, but also because every sentence he writes seems to have been painstakingly crafted. Which it probably has.

I treat it as a day job, so I’m at my desk by 8, then after a bit (okay, a lot) of faffing about on social media, I start writing. I’ll aim for somewhere between a thousand and two thousand words a day, with the odd (okay, frequent) break for faffing about on social media, coffee, going for a run etc. Depending on what stage I’m at with the novel – I write one a year, and this schedule keeps me comfortably up with that. 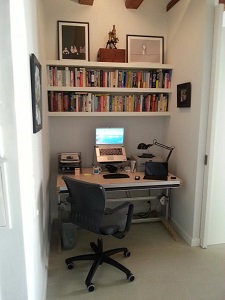 Computer at home. Chromebook when I’m out and about. It’s good to watch the wordcount go up, which you can’t do with longhand. Also, I have terrible handwriting.

I’m very fond of Dan from The Ex-Boyfriend’s Handbook series. Someone told me once he’s the person I’d like to be, if I thought I could get away with it.

I’ve tried both ways, and to be honest, don’t find either one is better. I love not plotting and just seeing where the characters take me, but equally, it’s sometimes helpful to have a framework. Usually, as long as I have the first line, the last line, and a title, I’m good to go. 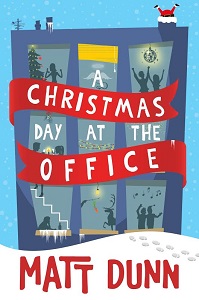 With her new billionaire boss in town, Sophie’s determined to swap the No-Jobs she meets on Tinder for her very own Steve Jobs. But will looking like a million dollars be enough to kick-start a Fifty Shades adventure?

A ring in his pocket and dressed to kill, Calum’s planning to get down on one knee. Though if Mia doesn’t say ‘yes’, he’s not sure he’ll ever get back up.

Julie’s got a surprise for Mark—though it’s something she’s not even sure she wants. Meanwhile, Mark’s got another choice to make: the love of his life, or the opportunity of a lifetime?

With his job on the line, and the ex who broke his heart back on the scene, Nathan’s day is becoming a nightmare. But he’s about to meet the woman of his dreams.

This year’s office Christmas party should be a night to remember—but for five of Seek Software’s employees, it might be one they’d sooner forget.

Probably a year – though this one was a bit easier as I already had the characters and the setting fully-formed. A Day at the Office, set in one office over the course of one Valentine’s Day, had sold particularly well, and I’d had loads of emails from people wanting to know what happened next, so fast-forwarding to the office Christmas party seemed to make sense. Though writing a multi-character, multi-viewpoint novel set on one day, and making all the plot strands tie up, and in time for a Christmas release, was a little challenging.

I have a mortgage, so writer’s block isn’t really an option. If I ever get stuck, though, there’s always some editing to do, or another part of the novel to work on – sometimes, writing an idea for a couple of chapters ahead makes it easier to go back and write what you were struggling with.

Names are always tricky, as people always associate names with particular character traits based on their experiences, and to be honest, I find it extremely hard.

I guess I run through some options, google them to make sure I won’t be sued, then just pick something that ‘feels’ right – though I did take part in the ‘Authors for Nepal’ auction this year, and auctioned off one of my character’s names in A Christmas Day at the Office for charity, so one generous bidder made the process a little easier this time around.

Whoever the director wants to cast – I’ll be too busy choosing which motor yacht to buy myself with the option money. Seriously, though, I never picture actors/celebs when I write my characters – I try to make them normal, relatable people, and I know that my readers have their own (and sometimes, very different) ideas of who the main protagonists ‘are’, as will the director, so I wouldn’t even want to suggest anyone. Though obviously if I’m on a percentage of box office receipts, I’d have to say Tom Cruise and Jennifer Lawrence. Yachts are expensive to run.

Nope. I’d be too nervous that they’d hate it – and I don’t even like them reading it after it’s been published! I did get a few select friends to pre-read in the early days, but now I have a team of professionals at Amazon publishing to do that. Thank goodness!