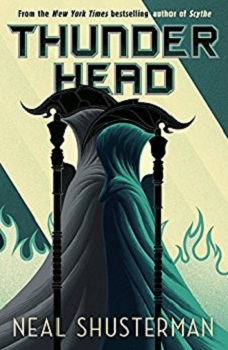 The stakes are high in this chilling sci-fi thriller, in which professional scythes control who dies. Everything else is out of human control, managed by the Thunderhead. It’s a perfect system – until it isn’t.

It’s been a year since Rowan went off-grid. Hunted by the Scythedom, he has become an urban legend, a vigilante snuffing out corrupt scythes in a trial by fire. Citra, meanwhile, is forging her path as Scythe Anastasia, gleaning with compassion. However, conflict within the Scythedom is growing by the day, and when Citra’s life is threatened, it becomes clear that there is a truly terrifying plot afoot.

The Thunderhead observes everything, and it does not like what it sees. Will it intervene?

Or will it simply watch as this perfect world begins to unravel?

I’m so glad that I read this book directly after the first in the series, I was still very much in the zone and this book was absolute perfection.

I felt that Scythe, the first book, was a little slow in the action and pacing department but it turns out that it was all about setting things up for this book – the politics we were introduced to have now taken a dark turn, we learn more about the Thunderhead and its origins, and Citra and Rowan are now finding their footing in the world of scythes. The Thunderhead is a giant AI system created by humans to run the world and sustain humanity, exploring what all that means is fascinating and a deeply compelling read. The pacing is punchy, taking us from one event to another with just the right amount of suspense and intrigue in between.

We’re introduced to a new main character in this book, Greyson, a regular person who was raised by the Thunderhead rather than his negligent parents. The author then tells us about events from the perspectives of Greyson, Rowan and Citra, with journal style entries by the Thunderhead between each chapter. So that’s two people who can’t communicate with the AI that runs the world, one who was raised by it and the AI itself which has to abide by its own rules, which means being unable to intervene in events despite being able to see what’s coming.

The best thing about this book is the huge and unpredictable leaps it takes with the narrative; some things you can see coming but others will leave you reeling. The author isn’t afraid to do some risky things, which I think pays off big time. Knowing that absolutely anything could happen makes it more exciting and a 500 page gut punch, which has left me devastated that the next instalment hasn’t been published yet.

It would be remiss of me not to mention the cover art for this series – I LOVE the cover design, I can’t wait for the entire series to be released so I can decide whether or not it would be too obsessive to have a poster made of them all.