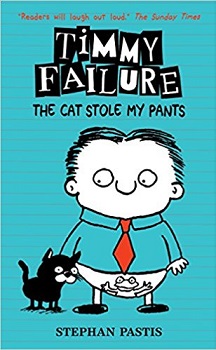 In the sixth book in Stephan Pastis’s New York Times bestselling series, Timmy is being threatened and must rely on his new partner to solve the mystery – and possibly save his life!

Everyone’s favourite best worst detective is back in Timmy Failure: The Cat Stole My Pants, the sixth book in the bestselling series that’s perfect for fans of Wimpy Kid and Tom Gates.

Timmy is in Key West, Florida, ostensibly for the honeymoon of his mother and Doorman Dave – if they even got married, which Timmy doubts. Unfortunately for Timmy, crime doesn’t take a holiday. And because Total has fled to Cuba, Timmy must rely on a new partner for help: Doorman Dave’s nephew Emilio.

Meanwhile, a surprise newcomer shows up in Timmy’s life and, as if things couldn’t get more hectic, Timmy’s pants have been stolen by a six-toed cat.

Timmy Failure: The Cat Stole My Pants, is the sixth book in the Timmy Failure series. To be honest, I had never heard of the series, nor read any of the other books, but from what I read, this certainly works fine as a standalone.

Timmy is a very eccentric, excitable young man. He believes he is a detective and has a polar bear business partner, who has taken off to live abroad. He also believes that someone is trying to kill him, his father is a secret agent, and that a six toed cat stole his trousers. Now you see where I’m going with the eccentric bit.

The book is very enjoyable. It is funny, quite often laugh out loud funny, and extremely silly, from beginning to end. His new assistant is his mums, new husband (or is he!) nephew, Emilio, who is holidaying with them in Key West, Florida. Emilio is easily manipulated, and Timmy is often quite mean to him, giving him demerits every time he says something that Timmy deems to be wrong.

There are plenty of black and white illustrations throughout, comic book style. These work perfectly with the story, and quite often they provide comical moments on their own.

This book will perk the interest of most children. It is a fast read, and extremely enjoyable from beginning to end.

Stephan Pastis was born in 1968 and raised in San Marino, California, a suburb of Los Angeles. He graduated from the University of California at Berkeley in 1989 with a degree in political science. Although he had always wanted to be a syndicated cartoonist, Pastis realized that the odds of syndication were slim, so he entered UCLA Law School in 1990 and became an attorney instead.

He practiced law in the San Francisco Bay area from 1993 to 2002. While an attorney, he began submitting various comic strip concepts to all of the syndicates, and, like virtually all beginning cartoonists, got his fair share of rejection slips. Then, in 1997, he began drawing Pearls Before Swine, which he submitted to the syndicates in mid-1999. In December, 1999, he signed a contract with United.

Pearls Before Swine debuted in newspapers in January, 2002, and Pastis left his law practice in August of that year. Pearls Before Swine was nominated in 2003, 2004 and 2007 as “Best Newspaper Comic Strip” by the National Cartoonists Society and won the award in 2004 and 2007. Pastis lives with his family in Northern California.