Why That Title? by Jane Owen

The Bitches of Suburbia by Jane Owen – Why That Title? 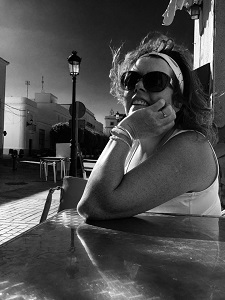 Jane’s first novel, Camden Girls, was published by Penguin twenty years ago and quickly became an international cult bestseller published in many languages including Japanese, Spanish,German, Hebrew, Italian and Dutch. She’d already spent many years working in the film business working alongside stars such as Christophe Lambert, Andi McDowell, Daryl Hannah and James Remar before switching to the music business and working for bands such as The Who, Robert Plant, ZZTop and many more. Eventually, even that got boring and that’s when she wrote Camden Girls.

After publication, life became interrupted by an unfortunate traffic accident and Jane moved out of London to Sussex and slowly returned to writing. Her novels don’t fit into any specific category and, frustrated by endless rejections along the lines of ‘You write beautifully but we don’t know how to sell this book’ she started self publishing. Rave reviews gave her the confidence to keep going and believe in what she was writing.

She’s still in Sussex, sharing her life with her musician partner, three horses and a dog and divides her day between writing and riding.

I’m the first to admit that ‘The Bitches of Suburbia’ is a somewhat contentious title, possibly more so in America where the word ‘bitches’ has slightly different connotations to here in the UK but coming up with the title was part of the inspiration for the whole book and it gradually became clear that there was no alternative.

I toyed with the idea of Women of Suburbia, Girls of Suburbia or even Suburban Ladies but none of them stuck. They all sounded a bit, well, girly, even suggesting that cupcakes and romance might be involved at some point. They aren’t. At one point I re-titled the book ‘The Welcome Wagon’ but we don’t really have welcome wagons in Britain, it’s more of an American thing and let’s face it, the women of Horseshoe Lane were not exactly welcoming to some of their new residents. I dropped that idea when I told a very good friend of mine what I was planning and she looked at me in absolute horror. ‘But that’s not you,’ she said, ‘Bitches of Suburbia is.’ I think she meant it as a compliment, I’m going to go with that thought.

She was right, of course, she’s known me a long time but the word ‘bitch’ is open to so much interpretation. I find it interesting that there is no male equivalent. You can call a good friend a bitch and it’s a term of endearment, you can call someone you don’t like a bitch and it’s an insult of the highest order. A bitch can be anything from an outspoken, sassy woman to a down and out skank via someone who’s just plain mean. However, although the word ‘Bitch’ covers a lot of bases, I was also taking a bit of a risk.

It was, is, entirely possible that the title itself puts some people off but sometimes you’ve just got to take a stand. That’ll be the old punk in me talking, the teenage girl who queued outside a record shop on a cold October day in 1977 to buy a copy of ‘Never Mind the Bollocks’. A title that was so contentious at the time it made the news. Now it’s on credit cards, it’s part of mainstream culture.

The other option was to go down the ‘Murder in Suburbia’ route but I felt that that using the word ‘murder’ in the title would be completely misleading, that people would then be expecting a crime novel, or some kind of thriller and I don’t think ‘The Bitches of Suburbia’ is either of those even if there is a body count, albeit a very small one.

A book’s title has to do a lot of work, considering how few words are involved. I think a good title has got to grab your attention, give you some idea of what you’re about to read, and I love books where there’s a moment where the title suddenly makes sense, when you think to yourself ‘Oh so that’s what it means, that’s where it came from.’ I love that moment. 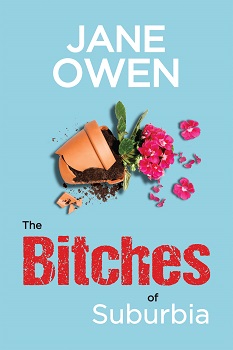 Nothing much ever happened on Horseshoe Lane – why should it? It was, after all, just a normal suburban backwater with the usual cross section of growing families, ageing pensioners, the occasional singleton and a brace of curtain twitchers. The arrival of celebrity couple, Heavenly and Travis, however, changes all that. This glamorous pair bring about a summer of competitive party throwing and ambitious home improvement projects that will have disastrous and completely unforeseen consequences.

Neighbours who’ve got by for years with just the occasional chat over a garden fence about the unseasonable amount of rain or the state of next door’s garden are slowly united by suspicion as a husband goes missing, a much loved cat turns up dead on a doorstep and Enid from Number Seven is found badly injured at the foot of the cliff.

Could one person be responsible for all of this? Could that person be the strange and unlikeable Hilary Jones from Number Nine? There was only going to be one way to find out and it was going to involve a lot of whiskey….

In this her wonderful follow up to ‘The Rock Star Known as Horse’, Owen’s riveting new story finds a murky side to the suburbs, a side where petty jealousies and neighbourly rivalries can escalate out of all control with calamitous results, all intricately observed with her usual dark humour firmly to the fore.