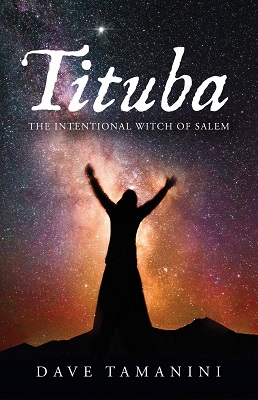 Tituba: The Intentional Witch of Salem

A Promise and a Hope

Enslaved Tituba has been faithful to a promise to her dying mama in Africa. She has appeased the masters from Barbados to Boston to Salem and waited for her magic.

When Tituba’s only son dies trying to escape slavery, her life changes forever. After enduring the crush only a mother can feel, she rages and turns to vengeance.

The villagers see witches and demons everywhere. Their ministers say the Devil has sent them to steal souls. But they are wrong. It is Tituba—disobeying an ancient rule—conjuring terrifying images with magic that sparks the infamous witch hunts of 1692.

As neighbors accuse neighbors of witchcraft, hysterical trials follow. And Tituba gloats in her power. But when hangings begin, her conscience arises. Can she confront her secret crime? And when a chance for redemption presents itself, will she take it?

Tituba THE INTENTIONAL WITCH OF SALEM, with a magical point of view, explores the emotions and reasons driving this unstable time.

This title is a historical fiction novel that weaves in many of the known facts regarding the Salem witch trials, the author has taken pains to stick to the history while adding some of his own spin on things. It’s still subject of much speculation what actually drove the people of Salem to accuse and condemn each other of witchcraft, the author opts for a combination of the occult and plain old hysteria.

Tituba is a house slave for the minister of Salem, stolen from her homeland as a child and subjected to pretty much every horror and indignity a human being can have inflicted on them by other people. Despite this, she’s determined to follow her mother’s advice and appease her captors rather than make waves. It’s only when the unimaginable happens and she can’t bear to appease them any longer that she finds her magic and starts to plans visions of devils in the minds of some of the villagers, setting the proverbial match for what happens next.

This is where the book lost me somewhat. Tituba represents many things: she’s a slave, a black woman, a mother. There’s a whole wealth of feeling in that character to be explored, especially given that she’s a real historical figure but the author never took us that deeply into her psyche. I enjoyed the premise of the story very much, but I feel that she wasn’t as fully realistic as she deserved to be and struggled to believe some of her emotional responses later on in the book.

The ending in particular was excruciating, though about as happy as it could have been based on the historical facts known about ’s fate.

The writing style itself is a slow burn and tells the story through the eyes of Tituba and Samuel Pariss, her ‘master’. It’s an interesting read based on the historical content, which is a moment in time that’s always fascinated me, but the representation of the characters doesn’t quite spark the same excitement.

If you’re looking for a fantasy/factual/fictional combo, this is a good book to get you on your journey!

What did you think of Tituba: The Intentional Witch of Salem? Share your thoughts in the comment section below!