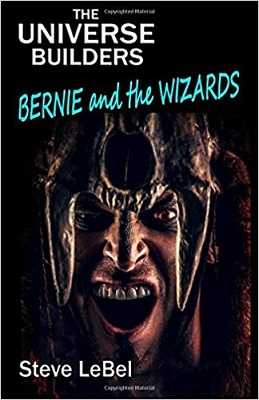 The Universe Builders #3
Bernie and the Wizards

For God School’s latest graduate, the adventure continues… Bernie is a young god who fixes broken universes for a living. Unfortunately, the universe he’s working on is in the middle of a civil war caused by Ashok, a murderous wizard determined to control the lucrative pepper trade.

Bernie’s boss urges him to solve the problem by destroying the evil Ashok and his people, but Bernie wants no part of such a massacre. Struggling to find another solution, Bernie tries to get Ashok to give up his plans for world domination.

As Bernie’s attempts at peaceful solutions continue to fail, his boss comes to believe the best solution is to destroy all the people and start over again. But Bernie can’t let that happen. He has no choice but to destroy Ashok and his followers. Although he hates the idea of destroying life, Bernie prepares to do what is necessary, only to discover the evil wizard’s powers are far more than superstitious nonsense.

The young god is drawn into an epic battle that pits the power of the gods against the power of magic. And the lives of every man, woman, and child on the planet hang in the balance.

This is the third book in the Universe Builders series which the author says should all stand alone. As I have not read the two previous volumes I can vouch for that.

Here we have fantasy on a grand scale. Let’s face it, you cannot get any bigger than building universes although Steve LeBel has found a new angle with his stories of gods who work for the “The Business”.

I enjoyed his comparisons with today’s current working practices, especially the theory of destroying and replacing rather than repairing something that is not working correctly. The storyline also raised some interesting ethical arguments including ethnic cleansing and what constitutes life.

The lead character Bernie comes across as a loveable young boffin; what some might call a nerd. He makes a good hero, prepared to adhere to his principles even though they frequently run counter to his colleagues’ principles. Most of the support characters are similarly believable especially those from Photox.

LeBel writes good narrative. He generally keeps the story moving although I felt that it could have worked just as well with one or two of the side stories omitted. Maybe they are necessary to keep the Universe Builders series flowing. There were some romantic episodes which I thought bordered on “cheesy” and I definitely do not want to think about the relationship between Sissy and Zephie.

However, I do have an issue with the story and it is one that I personally have with many fantasy books. For any work to be believable I think the reader needs to know what the boundaries are. By definition gods are of course omnipotent but having the knowledge that Bernie could achieve almost everything meant that I was unlikely to be really amazed at the outcome. I therefore found the closing chapters somewhat neat and rather twee.

I understand that the first book in this series has won a number of awards so The Universe Builders are clearly making a mark. Personally I am not convinced but, it was a reasonable read with some novel ideas so I have awarded The Universe Builders: Bernie and the Wizards four stars.

What is the best way to describe an author who writes humorous fantasy?

Do we tell about bookshelves full of fantasy, science fiction, and paranormal books, his love of mythology, or the years he spent as dungeon master? Or is it more important to know his favorite player-character was a chaotic-good elf? What about that stack of old comic books he never seems to get rid of?

But there’s a serious side too. The other half of his bookshelf is filled with books on management, marketing, computer programming, and financial analysis? What about his years as a hospital president, or the many businesses he created, his years as a stock trader? What about his early years counseling drug addicts?

Is there a pattern to his travels around the world? Why chose places like King Arthur’s Camelot, the Temple of Delphi, Buddha’s Tree of Enlightenment, China’s Forbidden City, or the Great Pyramid of Egypt? What is it he’s searching for?

And what does any of this have to do with writing a good fantasy book?

Perhaps it’s that mix within Steve that makes The Universe Builders such a delightful story with such serious undertones.