Up the Seine without a Paddle by Eliza Watson – Book Review

Up the Seine without a Paddle by Eliza Watson – Book Review 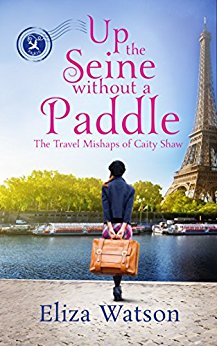 What do you do when the City of Love doesn’t love you?

Caity Shaw takes on Paris and her next event planner job with a bit more confidence—which is immediately shot down when she’s forced to take responsibility for a six-year-old brat. They’re kicked out of a famous museum, and she goes from being a glamorous event planner—for a funeral directors’ group—to a reluctant au pair. Just what she doesn’t need as she struggles to regain self-esteem whittled away by an emotionally abusive ex-boyfriend.

Declan, Caity’s hot Irish coworker, helps her maintain her sanity and sense of humor when she is repeatedly thrown out of places in Paris. He also perpetuates her facade as an experienced planner, a goal she’ll never achieve if she’s spending her days at puppet shows. Caity and Declan spend evenings exploring Paris and researching her Irish grandmother’s mysterious past, uncovering secrets that could tear Caity’s family apart.

Declan reveals his own secret, which might bring Caity and him closer, despite her attempts to keep an emotional distance from the charming womanizer. However, the only way to help Declan open up and heal might be to confide in him about her past. Caity finally has faith in herself—can she learn to have faith that others won’t judge her mistakes?

This is the second book in The Travel Mishaps of Caity Shaw series and is, if possible, even better than the first.

It just makes such deliciously compulsive reading and is a perfect comfort read when you’re feeling a little down. Eliza Watson’s writing style is so easygoing and personal, with the first person approach to this novel, it feels like you’re the main character’s confidant and have a ringside seat to all her shenanigans in this latest book.

Caity, the main character in question, is naturally upbeat and sweet but she’s not long out of an abusive relationship and is trying to re-establish her identity after being told for so long that everything about her was wrong. The hardest part to this venture that she doesn’t really know who she is as a person, but she’s building bridges with her family and is working on her genealogy to see if finding her roots helps her figure out who she is.

Caity began the search for her grandmother’s past in the first book of the series, Flying by the Seat of my Knickers, but this book doesn’t have a huge amount of development on that front but I was delighted to learn that the next book is due out in July 2017 so there’s a promise of more already!

The beauty of this book is the character development, Caity is gaining a little more self-confidence now she’s having some little wins in her new job. With this self-confidence, however, she’s starting to chip away at the walls she had to build around herself to survive her abuse relationship and the breakup – it’s painful to read but very cathartic. The pace of this book sets the tone for what I think we can expect from the rest of the series, the pace at which our heroine is getting her life back together suggests that we have a few more books ahead of us before we can reach what I hope (pray, beg, possibly bribe) will be a final happy ending.

This all sounds heavy and depressing but this book is wonderfully fun, humorous and light-hearted. Caity is working her second ever job as an event planner/coordinator and though she’s finding her feet in this industry, you can never predict what’s going to happen next! The author herself is an event planner and you can feel the authenticity of a lot of the issues the main characters face, there’s something about knowing that all these hilarious disasters are probably loosely based on real life events that makes them extra funny!

The one thing to realise about this series, so far at least, is that it isn’t really a romance – sure, there are some fuzzy feelings, but it’s just about a woman rebuilding her life and how she learns to cope under pressure all over again.

I would recommend this book for fans of travel and light humour, it’s so easy and comforting to read that I would put this on a list of holiday reads.

My first attempt at creative writing was in fourth grade. My friends and I were huge Charlie’s Angels fans and I would sit in my bedroom at night writing scripts for us to act out at recess the following day. I was Kelly Garrett.

Fast forward to the present, I’m still writing stories about beautiful women who always get their men. The journey from fourth grade script writer to published author wasn’t an easy one, but it was always an adventure and the final destination was well worth it.

When I’m not travelling for my job as an event planner, or tracing my ancestry roots through Ireland, I’m at home in Wisconsin working on my next novel, bouncing ideas off my husband Mark, and my cats Quigley, Frankie, and Sammy.