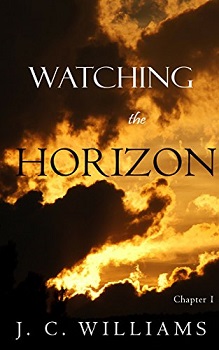 Watching the Horizon
Chapter One

Chris Gluszek (Glue-sec) a California native, now living in Memphis, Tennessee, is new to the police force and the south. Chris is faced with a choice of conforming, trusting the words of others or, finding out how to protect and serve by exposure and battling his fears and the influences of others.

Marcus Freeman, a troubled black man, was born and raised in the south. After serving in the army, he comes home to realize that things are no different from his turbulent childhood. Struggling to accept the state his family is in, Marcus is faced with the task of being the father and protector of his entire family.

Through their journeys, they find themselves having to deal with the effects their decisions have on themselves and the people they love and look after.

Watching the Horizon is a short novella of only 78 pages by J.C Williams, and is chapter one in his new series of contemporary fiction, though it could also be read as a stand alone short story too.

Chris Gluszek is new to the police force and is faced with making his own decisions about the kind of police officer he wants to be. Does he want to stand by his morals, or being led by others so he fits in.

Marcus Freeman, the second main character, is only really heard about through the eyes of his family, as he is away for much of the book. It is near the end that we get to discover why he is away.

The decisions that both men make have an impact on the people close to them, I guess in further chapters more will be revealed about their choices and the lasting effects.

What I read I actually really liked. I’m not sure on the whole Chapter releases though, I would prefer the chapters to be just in one book. I award it 3 stars on the basis that I have not read the whole book, and by the time I get around to reading the next chapter, and so on, I will most likely of forgotten some of the plot.