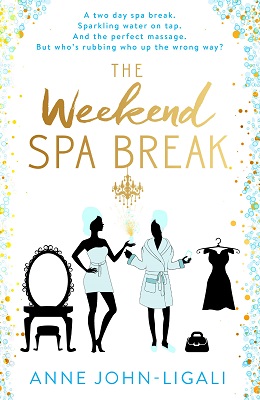 And the perfect massage.

But who’s rubbing who up the wrong way?

Anne John-Ligali is a writer and the founder of Books and Authors UK, a popular website featuring author interviews and book reviews. She loves all things books: reading, writing, going to book events, and meeting other book lovers. She has written a series of short stories and is currently writing her first novel.

Anne has always loved stories and read many books as a child, including the entire Sweet Valley High and Caitlyn series. Her interest in writing fiction came years later, when she began writing for pleasure in 2007. Since then, Anne has been writing on and off and enjoys participating in writing groups. Twice in 2014, she proudly won the monthly Novelicious Pintrest Prompt Fiction Competition.

When Anne is not writing, she is likely to be at soft play with her kids, taking long evening walks in Hyde Park, making green smoothies, window shopping, or having a pampering session at her local beauty salon (whenever she gets the chance). She can also be found watching box sets (albeit with a bit of shame at still having to catch up on Scandal, Grey’s, and Downton).

Originally from Peterborough, Anne now lives in London. After moving to London, she studied graphic design at the University of Arts and has held a number IT administration jobs in the city. Anne continues writing and aspires to write more women’s fiction books, a non-fiction book and several children’s books.