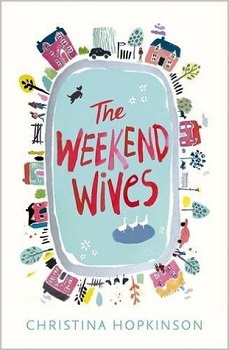 ‘What is the world, then, of the weekend wife?’ asked Emily.
‘Secrets, there will be secrets. Not necessarily serious ones, but the triviality of them almost makes them worse. Someone will start smoking. One of you will see an ex and for some unknown reason decide not to tell the other one and before you know it, it’s become a thing.’ Laura sighed. ‘None of it really matters, I know, when I say it like that, but it all chips away.’
‘Still, those sort of secrets, like you say, they’re not anything serious, you know, like…’ Emily paused, unable to say the word out loud.
‘Like an affair?’ said Laura. ‘Oh god, this set-up is a recipe for adultery, don’t you think?’

A few months ago, Emily and her husband sold their house in the city and bought a place in the country. But Emily didn’t know that it would sometimes feel like a move to another country altogether. Moreover, with Matt working in the city from Monday-Friday, and only coming home to her and the kids at the weekend, Emily is suddenly plunged into the world of a ‘weekend wife’. With all the obstacles . . . and secrets . . . that brings with it.

I loved the sound of The Weekend Wives from the synopsis – I knew it was going to be a ‘chick lit’, and thus most probably a fairly easy page turner. I’m glad to say I was in fact right! You could easily read this book in one sitting, but also just as easily read only a few pages at a time if you wished. It isn’t too complicated or advanced in terms of both plot-line and vocabulary, so this book would be suitable for a wide range of abilities.

The story itself follows three main protagonists whose family lives are tested as their partner works away for long periods of time, often returning solely on the weekends – hence ‘The Weekend Wives’. Each character is likeable and has a developing plot of their own throughout the book.

Emily has an annoying dog and a love to gossip, but when a disaster occurs, she is forced to see her family values from a different perspective. Tamsin slowly begins to learn that her loving husband isn’t quite everything he seems, and the uprooting of an event that happened decades ago will put Sasha on rocky ground. Each character’s story-line inevitably ends up turning their lives upside down – but will this be for the better or worse?

What I loved the most about this book, is that the true revelations behind their story-lines are not what you expect, at all. From the synopsis, I thought I knew exactly what was going to happen to each character, but I was indeed very, very wrong.

I do have to especially praise Christina Hopkinson for thinking outside the box in terms of plots for each of the characters – it was nice not to see what I expected, which was a mediocre plot with three extra marital affairs with younger woman. This book is a lot more interesting than that! She also explores some difficult subjects well – with enough reservation and respect for the topics, but also getting deep enough to really make you think about the devastation of these in reality.

The only negative thing I would say about this book, is that there are some sex scenes that are overly cringy and a bit too ‘much’ in my opinion. I wasn’t expecting some of the vocabulary used, and I’m not a fan of erotica and such like, so some of it I had to skim read through! That being said, there aren’t pages and pages of it – only a few paragraphs or sentences dotted throughout the book.

Overall, I thoroughly enjoyed the read, and will give this book a 3.5 stars – whilst I wouldn’t choose to read the book over and over again, I would highly recommend any fan of chick lit to give it a go!

I was born in August 1969 in London, but my parents moved to Cambridgeshire soon afterwards. There I attended four schools, all convents and all called St Mary’s, before reading Modern History at Hertford College, Oxford. My first job on graduating was at Usborne Publishing. I’m rediscovering their books now that I have children and recommend them highly.

I then moved to Spain for three years where I worked as an au pair and at a publishing house, before ending up at Hello! magazine for a couple of years, which for labyrinthine historical reasons is partly edited in Madrid. When a royal death or engagement is announced, I still break into a cold sweat at the thought that I might have to sub-edit the list of names of attending foreign dignitaries.

I returned to London in 1997 (thereby missing being at Hello! for the death of Princess Diana) and worked on the launch of www.thisislondon.com (the Evening Standard online), which I edited from 1998 to 2000. I then worked on a series of lifestyle websites for Express Newspapers and websites to support television programmes for Carlton Productions.

I left Carlton to produce children, books and features for a variety of newspapers including The Daily Telegraph, The Times and the Guardian, and magazines such as Grazia and Red.

I live in North London with my three children and husband. He is not the basis for Joel in The Pile of Stuff.