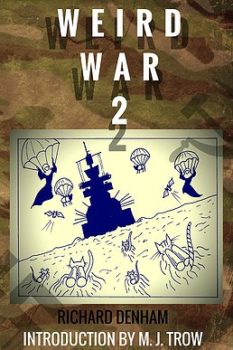 The Second World War is the bloodiest on record. It was the first total war in history when civilians; men, women and children were in the front line as never before. With so many millions involved, the rumour machine went into overdrive, tall stories built on fear of the unknown. With so much at stake, boffins battled with each other to build ever more bizarre weapons to out-gun the enemy. Nazi Germany alone had so many government-orchestrated foibles that they would be funny if they were not so tragic.

Parachuting sheep? Pilot pigeons? Rifles that fire round corners? Men who never were? You will find them all in these pages, the weird, wonderful and barely believable of World War Two.

I review books for the Historical Novel Society and I’ve noticed lately that there are an awful lot of novels coming out about World War II. It is doubtful, though, if most of them have plots nearly as fantastical as many of the true stories of the war.

Weird War 2 is a collection of strange stories about the Nazi party and the war the Nazis brought about. It is no academic study; there is no bibliography or footnotes and undisputed facts appear alongside conjecture and one or two tales that are admitted to be almost certainly false. Even so, my own knowledge of the history of the war suggests that most of the tales are accurate and some of them debunked stories I had always believed to be true but which turn out to have been exaggerations or propaganda. As a source of fascinating facts for the non-specialist, this book is brilliant.

Weird War 2 does rather pander to the modern taste for factoids. Each ‘chapter’ is one story, event, or theme from the war, each given just a page or two. They are arranged in alphabetical order of title, but as the titles are fairly arbitrary (‘The Horizontal Collaborators’ for a piece on the treatment of women in the occupied territories who had taken German lovers; ‘Hurrah for the Blackshirts!’ about the Nazi apologist Lord Rothermere) the result is a random selection of ‘Things you never knew about the War’. (There is a brief but incisive historical introduction for those who aren’t sure what the whole thing was about.) With no index, this will never be a useful work of reference but, for anyone planning World War 2 as their specialist subject in a pub quiz, it’s invaluable.

The format means that significant (and often tragic) items are juxtaposed with the trivial, the farcical and the downright hilarious. An item on the treatment of Black US soldiers by their own Army (scandalous), is followed by a very short item on Hitler’s ‘Night and Fog’ decree, ‘vanishing’ dissidents (horrific) and then a discussion of the Nazi campaign against smoking, which linked smoking and cancer and was remarkably effective over three decades before the Allies belatedly recognised the dangers of the weed.

There are stories about heroic martyrs in the concentration camps and plans to use pigeons to operate guided missiles. Some of the stories seem quite mad but are definitely true: I’ve heard the one about the Allied plan to build aircraft carriers out of ice before and construction was actually started. They’d probably have worked but (as this book fails to mention) their main value would have been to support the D Day landings and they weren’t ready in time.

I found this an ideal book to pick up and read for a few minutes before getting on with something more serious. Those few minutes tended to stretch much longer than intended, though. It’s easy to decide to read ‘just one more’ Richard Denham has an engaging style and a light touch for covering what are often very serious historical details.