What’s your Idea of a Dream First Date? by Karen Ross – Guest Post

What’s your Idea of a Dream First Date? by Karen Ross – Guest Post

Today on the blog we welcome author Karen Ross, with her guest post ‘What’s your Idea of a Dream First Date?‘, as part of the blog tour for her new book, ‘Five Wakes And A Wedding’ which was released on 19th September 2019. This post contains affiliate links. 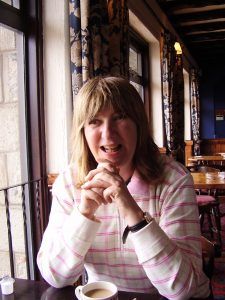 As a former journalist, broadcaster and advertising copywriter, Karen Ross has followed a fairly traditional path into writing fiction. Five Wakes and a Wedding is her fourth book, and like its predecessors, the novel has two common threads: the setting is London’s Primrose Hill – Karen’s own neighbourhood – and one of the characters is a dog . . . this time he’s called Chopper and he’s almost the same size as a Shetland Pony.

Karen has been self-employed for many years, and continues to work as a marketing consultant, in the absence of an offer to manage Tottenham Hotspur. By way of credentials, her other ‘job’ is trading profitably on the world’s first football stock market, a platform called Football Index, where you buy and sell players with real money.

What’s your Idea of a Dream First Date

Would you be thrilled to discover you’re about to take part in an evening of karaoke? Or tasked with escaping from an escape room (and possibly, your date)? How about an invitation to check out an exhibition?

One thing’s for sure . . . you’re fairly unlikely to be taken for lunch in a cemetery. Especially one in Paris, when you started the day in London. But that’s what happens to Nina Sherwood, the heroine of my new romantic comedy, Five Wakes and a Wedding.

Nina’s been intrigued by Barclay since the moment he almost ran over her dog while riding his scooter far too fast on Primrose Hill. She has him down as some sort of a man-child. But at least he’s fun, and takes her mind off the fact that her funeral parlour start-up is hated by the local community and dying a slow death. So here’s what happens on their date:

‘Have I done the wrong thing?’ Barclay’s face falls. It’s the first time I’ve seen him look anything other than self-assured.

‘Absolutely not. It’s just that I’m . . . well, it’s not exactly where I imagined us having lunch.’

The car glides to a halt at what looks like steps that lead to a park.

But I know better.

This is Cimetière du Père-Lachaise.

While Barclay murmurs something to our driver in a mixture of English, French and laughter, I take in my surroundings. Okay, so this isn’t how I imagined my day was going to turn out, but Père-Lachaise and New Orleans are meant to have the coolest, most interesting cemeteries in the world. And until now, I’ve seen neither.

‘You might want this.’ Barclay gives me a map. ‘I’ve brought us in the back way,’ he gestures. ‘It means we get to walk downhill. The other way’s pretty steep. Ready?’

Without waiting for an answer, he takes my hand. Together, we walk up a short flight of concrete steps and enter the cemetery.

‘Most people make a beeline for Jim Morrison’s grave.’ I feel Barclay’s pepperminty breath on my face as he speaks. ‘But if you’ll let me, I’d prefer to take you on a tour of some of the hidden gems. Unless, of course you’ve been here before?’

I know I’m supposed to fill the silence now Barclay’s finished talking, but something’s happened to my brain. I suspect it’s been fried by the pulses of electricity that have been flooding through me ever since we started holding hands.

Surreal and surrealer. Here I am, on a gorgeous summer day, on the fringes of a famous French cemetery, with a man I know almost nothing about – not even his surname – when I ought, by rights, to be at work.

And it feels so good.

‘Look over here.’ Barclay finally releases my hand and points towards a tombstone embossed with elegant gold letters and adorned with a pair of deep red roses. Maria Callas. The opera singer.

‘Her age when she died.’ I gesture towards the two dates on the stone.

Barclay gives me a quizzical look.

‘I can’t help it. I always calculate people’s ages. Date of birth to date of death.’

‘Seventy-four.’ My answer is instant.

‘One hundred and twenty! You’re teasing me.’

‘Yes,’ Barclay says solemnly, ‘I am. Did you know that someone stole Maria Callas’s ashes from the cemetery?’

‘Are you still taking the piss?’

‘No. I swear. She died of a heart attack here in France. The police eventually recovered the ashes, but rather than risk another theft, her friends had them scattered in the Aegean Sea.’

So is this the start of a beautiful friendship? Something more?

Barclay seems as if he could be perfect for Nina. But is he just a little too interested in her business? What exactly is his agenda? What’s he up to in a basement where the walls are lined with real gold? And can he be trusted?

Five Wakes and a Wedding has been described as Romantic Comedy Noir, with its balance of light and shade. I hope you’ll feel inclined to take a look, and decide for yourself if Barclay’s a hero – or a threat to Nina’s entire future. 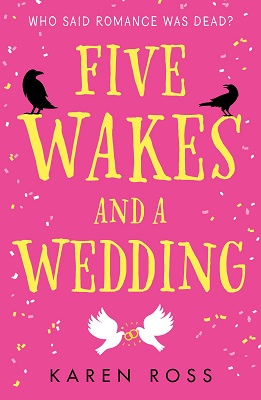 Nina is your average 30-year-old with a steady job, a nice home – and dead bodies in her basement. As an undertaker, she often prefers the company of the dead to the living – they’re obliging, good listeners and take secrets to the grave.

Nina is on a one-woman mission to persuade her peers that passing on is just another part of life. But the residents of Primrose Hill are adamant that a funeral parlour is the last thing they need… and they will stop at nothing to close down her dearly beloved shop.

When Nina’s ‘big break’ funeral turns out to be a prank, it seems like it’s the final nail in the coffin for her new business. That is, until a (tall, dark and) mysterious investor shows up out of the blue, and she decides to take a leap of faith.

Because, after all, it’s her funeral…

You can find out more about Karen Ross by visiting the website/social media sites below. 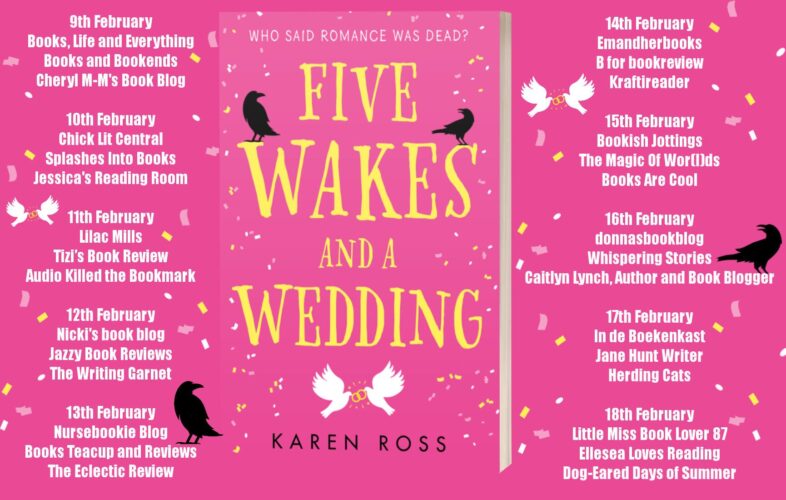