A Whiff of Cyanide by Guy Fraser-Sampson – Book Review

A Whiff of Cyanide by Guy Fraser-Sampson – Book Review 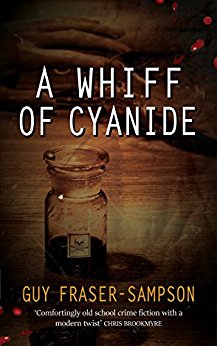 The third volume of the best-selling Hampstead Murders sees the team become involved with a suspicious death at a crime writers’ convention. Is this the result of a bitterly contested election for the Chair of the Crime Writers’ Association or are even darker forces at work?

Peter Collins, who is attending the convention as the author of a new book on poisoning in Golden Age fiction, worries that the key clue to unlock this puzzle may be buried within his own memories.

A character called Miss Marple offers her advice, but how should the police receive this?

A Whiff of Cyanide is the third book in the ‘Hampstead Murders’ series. ‘Death in Profile‘ being book one, and ‘Miss Christie Regrets‘ book two, both have been reviewed on our blog.

This time the Hampstead detectives are investigating the possible murder of well-respected crime writer, Ann Durham. Her death occurred at a crime writers convention meeting, and was witnessed by many, including DS Karen Willis and her partner Peter Collins.

They do know that Ann was killed by a massive dose of cyanide, but did she commit suicide, or was she murdered? Both are possible, especially when a few of her fellow writers that were attending the convention didn’t feel as favourable of Ann as the general public. Plus there was the matter of heightened tensions between Ann, her daughter Gina, and Gina’s boyfriend.

The more the officers dig into Ann’s past, the more surprises and revelations are unearthed, including one that could have destroyed her career.

All the detectives are back in this third instalment of Guy Fraser-Sampson’s crime series, with Superintendent Collinson once again leading the investigations, this time in to Ann’s possible murder.

Guy doesn’t just write about the goings on in the police station and the case, he also weaves the plot around the lives of his detectives too, which gives us, the readers, a better understanding and empathy for the characters.

Although this is book three, it can be read as a stand-alone, but I would advise reading the others first, as there is so much in each of the books about the detectives, that to truly understand them you need to start from the beginning.

There is also a theme emerging from within the stories of real life fictional crime writers. Their protagonists always seem to have a hand in helping solve the cases. Lord Peter Wimsey, Miss Christie, and Miss Marple, have all played their part in the three books.

The story reads as good old-fashioned police work, with plenty of twists and red herrings to keep you on your toes. There are no gory, horrifically graphic scenes, nor swearing. It is an easy to read, enjoyable book that has you waiting until right near the end for the case to be solved. It is only then that you realise how many clues were staring you in the face!