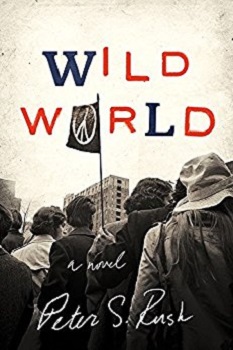 Set against the backdrop of the protest era of the early 1970s, Wild World is a gripping novel about one tenacious young man whose fervor for justice brings unexpected consequences for his own life.

In the spring of 1970, Steve Logan, like thousands of other college students across America, takes to the streets to protest authority and the Vietnam War. Fueled by a strong sense of moral justice, he wants to make the world better—a belief his girlfriend Roxy, a medical student, passionately shares. Weeks before his graduation, Steve’s life is upended when National Guard troops kill four students at Kent State University. Then, he meets a reform-minded cop who convinces Steve that to change the system, he has to get involved.

Eager to make a difference, Steve decides to give up law school and join the city’s police department. While the rookie cop with an Ivy League degree knows that change is difficult, the reality of fighting the establishment soon overwhelms him. His education makes him an outsider, and his honesty makes him a threat to the corrupt cops who use the power of their badge to inflict brutality and extort. His college friends think he’s a traitor to the cause and even Roxy, the woman he loves, has begun to pull away.

But Steve isn’t going to give up. Devising a dangerous plan to radically shake up the system, he begins to collect the evidence to take the corrupt copsdown. . . unless they take him out first.

Wild World has been my third Vietnam War themed book in the last few weeks. This is probably because the radical students of the sixties and the early seventies are now retiring and finding the time to write books inspired by their experiences.

The book had me singing before I had opened it and it kept me singing until the end. The title of the book and of each chapter are song titles from the period, made famous by artists such as Cat Stevens, Dylan and the Stones. Additionally the book is peppered with cultural references to the period reflecting either good research or, more likely, the personal experience of the author.

Peter S Rush writes in an efficient and clear manner, much as you would expect from a former journalist. It was extremely easy to read and follow, the story kept moving and I finished the book in a matter of days. The strength of this book is in the settings, not in the plot which was fairly straightforward. Once the protagonist Steve had made the unexpected decision to become a policeman I felt that the story followed a fairly predictable path.

I understand that the author at one time also worked as a police officer so one would expect some truth in the suggestions of corruption within the US police. Was it really that bad? Please tell me that Rush has used some license to enrich the tale. Alongside the police corruption Rush includes many inequalities that existed at that time and sadly most of those issues are still prevalent today.

Wild World may not become a classic but it will entertain you. It will also give you a good insight to life around 1970. I have awarded four stars.

Peter S. Rush is a graduate of Brown University and has a Masters in Creative Writing from the University of Florida. He was a newspaper reporter, magazine editor, Peace Corps volunteer, and a police officer. He is currently CEO of a global management firm.