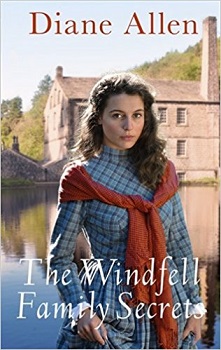 Twenty-one years have passed since Charlotte Booth fought to keep Ferndale Mill and her home at Windfell Manor following her traumatic first marriage. Now, highly regarded in local society and happily married to her childhood sweetheart, Archie Atkinson, she seeks only the best for their children, Isabelle and Danny. But history has a habit of repeating itself when Danny’s head is turned by a local girl of ill repute, despite his promise of marriage to the far more respectable Harriet Armstrong.

Meanwhile, the beautiful and secretive Isabelle shares all the traits of her biological father, the notorious Joseph Dawson. And when she announces that she is to marry John Sidgwick, the owner of High Mill in Skipton, her mother quickly warns her against him. An ex-drinking mate of her late father who faces bankruptcy, Charlotte fears his interest in Isabelle is founded more upon self-preservation than any notions of love. What she doesn’t realize is how far he’s willing to go to protect his future . . .

‘The Windfell Family Secrets’ is the sequel to ‘The Mistress of Windfell Manor’ by British author, Diane Allen and is set in the north of Victorian England.  We have a bit of backstory in the early part of the book to set the scene for picking up the tale just over twenty years after the original story ended.

The tale is written in the third person and we view the action from multiple perspectives.  This approach can work well but head-hopping without a chapter or section break can sometimes cause confusion, as the reader isn’t sure who to connect or sympathise with.

I was at a disadvantage from not having read the first book in the series, where I hope Charlotte’s woes would have drawn me in. She has clearly become a strong and successful businesswoman when we meet her in the sequel.  It would seem that after marrying her second husband, she has enjoyed a happy family life and is a fair and benevolent employer.

I found the first quarter of the book rather pedestrian with the characters being a little flat but the story picked up when Danny was led astray by Amy, a local girl who was very generous with her favours. This thread seemed far more plausible than Isabelle’s attraction to an ageing, near bankrupt mill owner who had been a friend of her evil birth-father.

Nevertheless, there were absorbing descriptive passages as well as some interesting social history and I enjoyed the gentle snapshots of rural nineteenth century life.

For me, this book was the proverbial curate’s egg. The plot was at times sluggish and at others, engaging. The pace wasn’t altogether consistent and I’m not convinced it has the ingredients necessary for a stand-alone novel.  However, if you enjoyed the first story in the series, you will probably appreciate the sequel and will look forward to the next instalment.  It was a wholesome, straightforward read and I award ‘The Windfell Family Secrets’ three-and-a-half stars.

Diane Allen was born in Leeds, but raised at her family’s farm deep in the Yorkshire Dales. After working as a glass engraver, raising a family, and looking after an ill father, she found her true niche in life, joining a large print publishing firm in 1990.

Rising through the firm, she is now the general manager and has recently been made Honorary Vice President of the Romantic Novelists’ Association. She is the author of For a Father’s Pride and The Mistress of Windfell Manor, and its sequel, The Windfell Family Secrets.

Diane and her husband Ronnie live in Long Preston in the Yorkshire Dales, and have two children and four beautiful grandchildren.