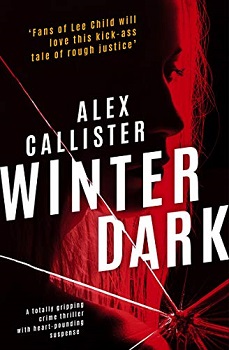 A girl with wide brown eyes looks into the camera. Below her picture, a clock ticks down. Cold traces the back of my neck, pricks my hairline. I will find you, I whisper.

It has been ten years since Winter – a headstrong loner with a broken past – was pulled off a mountain by special forces with the aim of turning her into the Secret Service’s most effective field agent. Now, she has just two weeks to bring down the head of a formidable criminal organisation, Alek Konstantin, before an innocent girl is murdered by a twisted killer in front of an online audience of millions.

Going deep undercover disguised as a paid assassin – alias Snow White – Winter’s aim is to infiltrate Konstantin’s inner circle. Calculating, charismatic and totally in control, he holds the girl’s fate in his hands. But every time Winter gets close to him, he melts away. He’s like a shadow, and yet he knows things about Winter – dark secrets she’s never told anyone. Who is he, and how can she reach him in time to save the girl?

Then Winter finds the body of a man from her past, stuffed in a dumpster with a bullet through his forehead, and things begin to fall into place. But with the girl’s death growing closer with every tick of the clock, and Winter’s protective shell starting to crack, does she have what it takes to bring down Konstantin before the clock hits zero?

Impossible to put down, Winter Dark is an action-packed and twisty read with a heroine you won’t forget. Perfect for fans of Lee Child, Sandra Brown and The Girl with the Dragon Tattoo.

Please note: this book contains scenes of a sexual nature.

Winter Dark is the first book in a new series featuring a kick-ass female, Agent Winter, who is trying to undercover the man behind Firestorm, a website where people can put information on who they would like killed and the killer’s bid for the job, all done anonymously.

If Winter is to succeed she needs to infiltrate the man behind the sites criminal organisation but getting in won’t be easy and finding the man at the top will be even harder, although he might just find her first as it would seem that they are both looking for one another.

For years some people have been crying out for a female Bond, well author Alex Callister gives us just that. Winter is touch, agile, sexy, she can take any man down as well as bed any man she wants to. It is like she is not only a female Bond but a female Jason Bourne and Ethan Hunt all rolled into one.

The idea behind Firestorm is quite scary, imagine a site where anyone could become a target for any reason. The book is fast-paced the whole way through and does play out like an action thriller where the reader is constantly having to keep up with what is happening. You do need to pay attention though as a lot does happen, so this isn’t a book you can skim reader, otherwise, you will find it difficult to understand.

There are a few sexual scenes and a lot of references in this book. My personal feeling is that not all of them were needed, so if you don’t like these types of scenes then this probably isn’t for you, but they are no different from those that you see in the action movies where men have the lead.

Overall I enjoyed the book. I love a tough female protagonist. I enjoyed the prologue starting ten years before the chapters. The writing was convincing and kept me on the edge of my seat wondering what was going to happen next. I do hope that we learn more about Firestorm in the next book as I don’t feel that this book covered everything I needed to know.

Alex read history at Oxford and the British School at Rome and was set for a career in academia until the beginning of the tech boom woke a life long interest in the internet. She has spent twenty years in the City studying the rise of technology and its transformative effect on industry. She describes the ‘internet of things’ as the internet of increased attack surfaces.

Winter Dark is dominated by Firestorm, eBay for the contract kill market. As an analyst in the telecoms and electronics sector at the height of the dotcom boom, Alex watched the internet sweep away barriers, break down borders, transform every industry. Ever since, she has been fascinated by its potential to facilitate crime – a potential that, to date, has yet to be fully realised. She spends her days visiting London’s high security hosting sites and speculating about what might be.