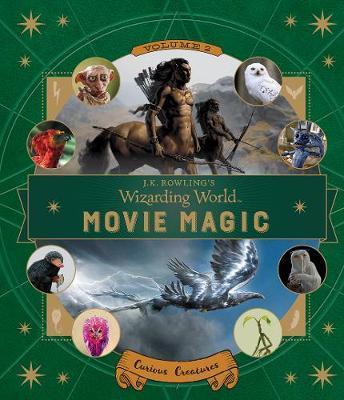 Thunderbirds and Nifflers, house-elves and Hippogriffs – J.K. Rowling’s Wizarding World abounds with magical creatures of all kinds. But how does a Bowtruckle come to life on the big screen?

Is an Occamy a snake or a bird? And what’s the truth about Mooncalf poo? Featuring detailed creature profiles, stunning artwork and captivating insights from the making of Fantastic Beasts and Where to Find Them and all eight Harry Potter films, these pages reveal everything fans want to know about how these creatures were created.

Last week I reviewed volume one – ‘Extraordinary People and Fascinating Places‘. In that review I explained that this collection of books is all about the Harry Potter movies (including Fantastic Beasts), and gives you an inside look at the props, people, characters, etc.

Volume two is all about the curious creatures from the films, once again starting off with Fantastic Beasts. The book opens with Newt’s Magical Case, in which the animals that he has helped throughout the world live.

The first creature that we meet is my favourite from that film, Niffler. People often say that Niffler looks like a cross between a Duck-Billed Platypus and a Mole. He may look like a cross between those animals but, the inspiration behind Niffler’s behaviour actually came from a Honey Badger that the visual effects department saw raiding someone’s home.

The second part of the book is all about the eight Harry Potter movies. The creatures are separated into different sections including, Forest Dwellers, Lake Dwellers, Dragons, In Class, Companions, The Working World and Dark Forces.

From Centaurs to Merpeople, Boggarts to Hedwig, the book covers all the creatures from the films, big or small. It even includes the house elves. My favourite elf is Dobby who we first meet in the second film, Harry Potter and the Chamber of Secrets as the Malfoy’s servant. Dobby was voiced by actor Toby Jones, who has starred in many movies, including, The Hungers Games and Captain America series.

Throughout the book, alongside the information about each creature, snippets of facts, drawings and photographs are lots of items that pop up, open, lift up or pull out, as well as stickers and a poster at the back of the book that you can remove and hang on your wall. As I mentioned last week, these items are to be handled delicately, so not a good book for a young child.

This book, alongside the other two in the collection, would make a great Christmas Present for any Harry Potter fan, or indeed to keep for yourself 🙂