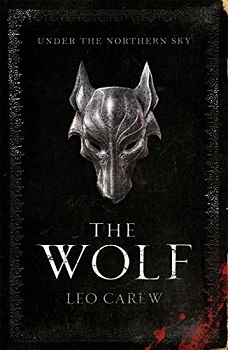 The Wolf
Under the Northern Sky Book One

A great war has come to the land under the Northern Sky.

Beyond the Black River, among the forests and mountains of the north, lives an ancient race of people. Their lives are measured in centuries, not decades; they revel in wilderness and resilience, and they scorn wealth and comfort.

By contrast, those in the south live in the moment, their lives more fleeting. They crave wealth and power, their ambition is limitless, and their cunning unmatched.

When the armies of the south flood across the Black River, the fragile peace between the two races is shattered. On a lightning-struck battlefield, the two sides will fight – for their people, for their land, for their very survival.

The Wolf is a thrilling, savagely visceral, politically nuanced and unexpectedly wry exploration of power and identity – and how far one will go to defend them.

The Wolf tells the tale of Roper, son of Kynortas, the Black Lord. When Kynortas is felled during a failed battle against the Sutherners, control of the legions and the Black Kingdom is instantly bequest to Roper, forcing him to make the most difficult decision on the battlefield.

On his return to the Black Kingdom, he has to face the music. An inexperienced ruler facing opposition from everywhere possible, including the Captain of the Sacred Guard, Uvoren, Roper has to use all of his strength and cunning to fortify his position as the Black Lord. Quickly developing political skills, Roper learns where he needs to make allies and where he needs to ultimately befriend people, that even the Black Lord himself shouldn’t be associated with, putting not just his position, but his life in danger.

During this journey, Roper twists and turns to try and carry favour with the people of the Black Kingdom, getting help along the way from a few trusted allies. The only real way to gain the complete support of his subjects is to take revenge on the Sutherners for what they did to the forces of the Black Kingdom, and what they did to his father. Roper has the ultimate test ahead of him.

The Wolf is set in medieval times, with armies of pike men, cavalry and berserkers, where the sword is typically the weapon of choice. If you don’t know much about this era, you needn’t worry. Leo does a wonderful job of setting scenes. His descriptions of buildings, rooms and atmosphere are fantastic and it is very easy to put yourself in the scene, right there with the characters. The battle scenes would be right at home in the film Braveheart and are wonderfully detailed.

I’m not a particularly fast reader (3-4 weeks for a book), but I could not put this book down, finishing it in barely a week. I couldn’t wait to see how Roper would overcome his next challenge or see who else would choose to go up against him. There is so much more that I could have included in the synopsis that I have written, but I really didn’t want to spoil the events of the book, and there are many of them.

With a fast pace and wonderfully descriptive writing, The Wolf is well worth a read, even if the medieval time isn’t your normal area of interest. This book is so easy to read and you will get a lot of enjoyment out of it. If I had one criticism of the book, I would say that some of the chapters could be shorter – I’m a fan of the sort of length that Dan Brown uses, making it easy to put the book down when you realise that you’ve been reading it for too long – but I have to say, with this book, even when you do realise that you’ve been reading it too long, you still won’t want to put it down!

I am now eagerly looking forward to the second book in the series, The Spider, which is released April 2019.

The third of four children, Leo Carew grew up in the centre of London, in the shadow of St. Paul’s Cathedral. Inspired by audiobooks, he developed a late interest in reading and began trying his hand at writing soon afterwards. It was at this time that he also developed a sneaking suspicion that the city was not for him and spent as much time as possible exploring remote areas. After school, this led to two formative months spent on expedition in the High Arctic archipelago of Svalbard.

Three years followed reading Biological Anthropology at Cambridge University, most of which was spent staring out of the window, dreaming about colder climates. Obligatory time with serious studying done, Leo returned to Svalbard – Old Norse for “The Cold Edge” – where he lived in a tent for a year training and working as an Arctic guide. During this time, he revisited a novel he had begun at the age of 12 and began reassembling it in the considerable space offered by 24hr darkness. A reluctant return to London to train as a doctor and pursue a career as an army medic followed, during which time he completed his first novel, The Wolf.

Leo currently lives in London, writing, studying medicine and breaking off as often as possible for an adventure somewhere cold and wild.