Australia 1945. Until now Kate Dowd has led a sheltered life on Amiens, her family’s sprawling sheep station in northern New South Wales. The horrors of war have for the most part left her untouched. But with her father succumbing to wounds he’s borne since the Great War, the management of the farm is increasingly falling on Kate’s shoulders.

With only the sheep-rearing book The Woolgrower’s Companion to guide her, Kate rises to the challenge. However the arrival of two Italian POW labourers unsettles not only the other workers, but Kate too — especially when she finds herself drawn to the enigmatic Luca Canali.

Then she receives devastating news. The farm is near bankrupt and the bank is set to repossess. Given just eight weeks to pay the debt, Kate is now in a race to save everything she holds dear.

New South Wales, Australia, 1945, Kate Dowd lives on a sheep farm with her father Ralph Stimson and aborigine housekeeper, fourteen-year-old Daisy. Her husband Jack is off fighting in the Second World War.

Although Italy were now an ally in the war, their Prisoners of War (POWs) are still to be kept as prisoners. They are sent to work as part of a government scheme and the family acquire two men Luca Canali and Vittorio Bottinella to work on their farm.

As well as being wary of the two new arrivals, Kate is concerned about her father who seems to be losing his mind after the death of her mother two years ago. Things come to a head when the bank manager speaks to her and tells her that the bills haven’t been paid in some time and that the family has just eight weeks to find the money to clear the debts or the farm will be sold.

This naive young girl who has had no dealing with the running of the farm quickly realises that it is up to her to save their home and livelihood and that means she rapidly needs to learn about the ins and outs of the family business.

I was pleasantly surprised by how much I enjoyed ‘The Woolgrower’s Companion’ I’m not a big historical fiction lover and the idea of the book being set on a sheep station in the Australian outback doesn’t scream excitement, but it was actually really enjoyable and addictive. It is essentially a love story too with an ending I wasn’t expecting.

Kate is a young woman having to learn to grow up very quickly. Her mother always told her to keep out of the going on to do with the farm, so when she needs to step in and essentially take over it is all new to her, even though she has grown up on the farm. She has also lived quite the sheltered life too so in some situations she was quite naive in the way she thought about things or the way she handled situations.

Ms Rhoades deals with lots of issues that were going on in the country (and in some respects across the world) in the 1940s. From racism to the plight of the aborigine people and also the strict social codes that were in place. These issues were all handled with care and were obviously well researched.

At the back of the book, there are numerous recipes for the mouthwatering food mentioned throughout. There are also questions that have been set by the author for book clubs to use to discuss the story.

Having spent two days sitting in the sun reading this and enjoying every minute of it, I now can’t wait until the sequel is released to carry on the story.

I grew up in a small town in the bush in Queensland, Australia. I spent my time with my head in a book, or outdoors – climbing trees, playing in dry creek beds, or fishing for yabbies in the railway dam under the big sky. Some of my favourite memories were visiting my grandmother’s sheep farm in rural New South Wales where my father had grown up. She was a fifth generation grazier, a lover of history, and a great and gentle teller of stories. My childhood gave me two passions: a love of the Australian landscape and a fascination with words and stories.

I left the bush at 13 when I went to boarding school in Brisbane. I stayed on there to study law and literature at the University of Queensland. After, my work as a lawyer took me first to Sydney and then all over the world, to London, Hong Kong, Singapore, Tokyo and New York. But I always carried in my head a strong sense of my childhood: the people, the history, the light and the landscape. Those images have never left me and they would eventually become The Woolgrower’s Companion. It’s a story I’ve felt I had to tell.

I currently live in London with my husband and our two young children. But I miss the Australian sky. 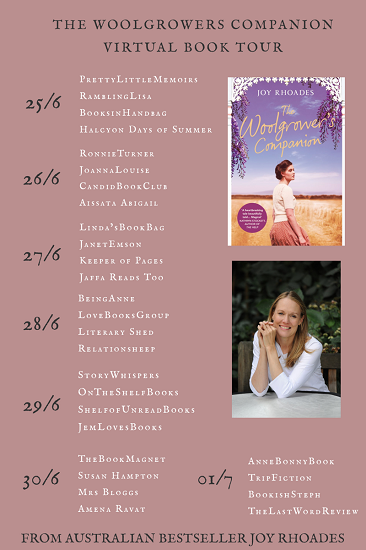