The Writing Life of: Georgina Clarke

This week I am thrilled to be interviewing author Georgina Clarke. Georgina will be sharing with us detail of her writing life, telling us all about her latest book ‘The Corpse Played Dead‘, which will be released on 19th August 2019 and answering a few fun questions too. This post contains affiliate links.

Georgina Clarke has always been passionate about stories and history. The Lizzie Hardwicke novels give her the opportunity to bring to life her love of the eighteenth century and her determination that a strong, intelligent and unconventional woman should get to solve the crimes – rather than be cast in the role of the side-kick.

Georgina was born in Wolverhampton, has degrees from Oxford, Cambridge and London, but now lives in Worcester with her husband and son and two lively cats.

Her first novel, Death and the Harlot, is published by Canelo. Her second is due to be published in August 2019. She is currently cooking up plots for the next novels in the series.

She is represented by Laura Macdougall, at United Agents.

Well, Enid Blyton, obviously. I loved the ‘Adventure’ series. I also fell in love with Lorna Hill’s ballet books about Sadlers Wells. And then A Traveller in Time by Alison Uttley.

I wrote stories as a child (and illustrated them, obviously!) and then stopped when I grew up and life became serious. I started writing fiction again when my son was born, eight years ago. I think, as a new mother, and a working mother, I needed to escape into another world that was entirely my own and that I had complete control over.

I don’t really have an average writing day.  When I have a whole day, there’s far too much faffing about that happens and then it all sort of flows – just as I’m about to do the school run. If I’m writing in the daytime (when I’m not at work) I write best in my local library. If I’m writing at night (which happens on as many days as I can manage) then I’m at a table at home, or in a chair with my laptop.

My second novel, The Corpse Played Dead is published by Canelo on 19 August. The first, Death and the Harlot, was published in May this year. I am currently writing the third in the Lizzie Hardwicke series.

I do have the obligatory ‘novel hiding in the drawer’ – which will never ever ever see the light of day. Don’t ask.

Kind of both. I know who did the crime, how and why. I know the main themes of the novel and where the key turning points and big scenes will come. But I let my characters take me on the journey and they do, sometimes, lead me to new places. Sometimes new people pop up as I’m writing and become significant players. That’s what I love. But I need to have a reasonable idea of where I’m going.

All the world’s a stage, and all the men and women merely players…’

When an undercover assignment for the Bow Street magistrate sees prostitute Lizzie Hardwicke trade Ma Farley’s Bawdy House in Soho for life as a seamstress the theatre on Drury Lane, it becomes clear quite quickly – what goes on in the wings is much more intriguing than the theatrics being played out on stage…

Soon Lizzie is once again thrown together with the handsome Inspector Will Davenport when a high profile investor is brutally hanged at centre stage and Lizzie discovers the body. With the suspect list rivalling any casting call, Lizzie will have to use every trick she’s hidden up her sleeves to unravel the tangled threads and bring the culprit into the spotlight.

For The Corpse Played Dead I was on a deadline. I had been mulling the ideas around for a few months (while Death and the Harlot was in editing phase), but I wrote really quickly once I got going. I think it was around four months.

Death and the Harlot was an easy one. It’s punchy, slightly racy and it has an eighteenth-century tone to it (in the word ‘harlot’). The second book was trickier. I was juggling three titles at one point. The word ‘played’ is significant, as it suggests ‘players’ or actors, and the book is set in a theatre. ‘Corpse’ is just such a great word. Well, I think it is.

Lizzie Hardwicke is an educated and intelligent woman who has fallen from grace. She’s making the best of her new life, but desperate to escape it. She’s scrappy, sharp-witted and occasionally reckless.

William Davenport is one of the magistrate’s men. He’s older than Lizzie, serious and reserved. There’s more to him than she realizes, but she knows that he’s carrying some personal grief.

They are becoming attracted to each other, but, well, it’s obviously complicated.

I have an amazing agent, Laura Macdougall at United Agents. She offered me representation last year and sent the first novel out to various publishers. Canelo loved it and asked me to write the second as well.

Writing book three in the series and planning the next books.

Self-teleportation. I hate sitting in traffic. If I could just blink and be where I needed to be, that would be great.  Can you fix this?

I have two young cats: Olaf and Tipu. We had them as kittens last year and they were not at all helpful to my writing (yes, leaping on laptop, that sort of thing …). They have calmed down a little bit now, but they still like to be nearby when I’m writing. 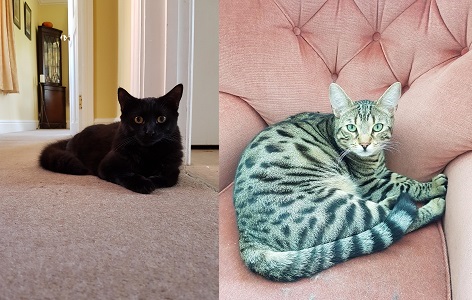 On the Small Side, but Very Determined.  This was, apparently, the health visitor’s written assessment of me as a baby. I discovered this when the school nurse, who was about to give me my BCG vaccination, read it out to me from the notes. It still amuses me, and many people would agree with the assessment.

Haha! I’ll be in a tavern, at a table, drinking beer, and trying to get off with a rich gentleman.

My happy place is a town called Gruissan in the south of France. It’s on the seaside and it is the place where I am most relaxed.

I would like to say a big thank you to Georgina Clarke for sharing with us details of her writing life and for a wonderful interview.

If you liked our interview with Georgina Clarke then share your thoughts in the comment section below!