The Writing Life of: J.G Clay

This week on ‘The Writing Life of:‘ I am thrilled to be interviewing author J.G Clay. J.G will be sharing with us detail of his writing life, telling us all about his latest book ‘Tales of Blood and Sulphur: Apocalypse Minor‘, which was released on 20th July 2015 and answering a few fun questions too. This post contains affiliate links. 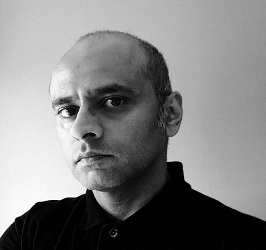 Born in the leafy peaceful surroundings of Leamington Spa, J.G Clay is the Midlands Master of The Macabre. Now in his early forties and residing in the leafier English county of Northamptonshire, Clay’s boyhood dream of bringing his unique combination of cosmic horror, dark fiction and science fiction to the masses is being realised. With the first volume of ‘The Tales of Blood And Sulphur’ under his belt, he is poised to unleash Gods, Monsters and weird events upon the world. Under Clay’s guidance, the Dark will become a little darker and Horror will go One Step Beyond.

When he is not destroying worlds, J.G likes to spend time with his family and friends, exploring the world of bass guitar, adding to his eclectic collection of music and watching as much geek TV and film as his eyes and brain will allow. He is an avid reader and a long suffering but ultimately optimistic fan of Birmingham City FC.

He hates cucumber, extremists of all stripes and colours and reality TV shows.

I know I was very young but beyond that, I couldn’t say exactly when it was. My peers wanted to be fireman and professional sports stars. I just wanted to be a writer. It’s pretty much a lifelong dream.

By doing nothing for years haha. I’ve written since the age of 13 but then growing up and life in general got in the way. My first book wasn’t released until I was 40. Just before my 40th birthday, I realised that if I didn’t give this thing a shot, I would regret it till my dying day. So here I am.

There’s quite a few but the main three would be Stephen King, Clive Barker and James Herbert. They were the ones I read avidly growing up.

The strangest habit I have is getting up ridiculously early. I’m up by 4.30 in the morning so that I can get some writing done before I leave for my day job. Then, in the evenings, I’ll write from around 8pm to 11pm.

Saturdays and Sundays are 8 to 9 hours shifts. It’s a gruelling routine but it’s got to be done. Nothing comes to you without hard work.

Computer. It’s easier to redraft, rewrite and polish the stories.

Fortuna Devoratum, the Eater of Luck. He’s a suave arrogant demon of gambling. I like his snarky dismissive way of dealing with the narrator of the story.

I do a very rough outline but beyond that, it’s a case of ‘dive in and see what happens’. I’m not the world’s best planner in real life and planning makes me feel constricted. 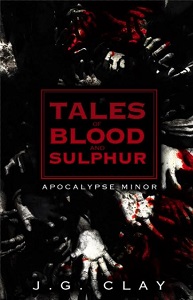 Eleven Tales steeped in Blood and reeking of Sulphur.

J.G Clay takes you on a journey through the voids of Reality and into dark places where demons, mutants and inter-dimensional creatures taunt, taint and corrupt Humanity. Survival is not guaranteed, sanity is not assured and death lurks in every corner. These are the Tales of Blood and Sulphur: Apocalypse Minor; eleven twisted tales of terror and mayhem……

There are cracks in the skin of Reality. Some are microscopic, others are as wide as a four-lane motorway. As the fault lines increase and widen, the door to our world shines like a beacon in the darkness, a warm and inviting sight to others beyond our understanding. When They cross over into our realm, The Tales begin……

A gambler taking one last desperate throw of the dice. A struggling writer making an unholy alliance. An eternal being fighting to stay alive in the financial capital of India. A man burdened with a terrible town secret. The Law Enforcers who must never cry. The End of Days live and direct from the rural heartland of England.

The blood is warm, the sulphur is burning, the tales will be told, the Apocalypse Minor is imminent!

All told, it was around five months.

I did about halfway through but I just powered through it. Gradually, the block lifted and it became easier to work out what I was meant to be doing.

No idea. The names just come along of their own accord.

Difficult one to answer as it’s a collection of short stories. I’d definitely love to have Matt Smith, the 11th Doctor Who in there somewhere. He’s great actor and an awesome Doctor. Also, Ben Browder who was the lead actor in Farscape and Stargate SG-1. He’s very underrated which is a shame because he’s one of the best American actors out there.

My wife gets first refusal on my stuff. After her, it’s a couple of my author friends. I don’t like to spread the new stuff out to a large amount of people.