The Writing Life of: Jackie Ladbury

This week on ‘The Writing Life of:‘ I am thrilled to be interviewing author Jackie Ladbury. Jackie will be sharing with us detail of her writing life, telling us all about her latest book ‘Air Guitar and Caviar‘, which was released on 24th June 2017, and answering a few fun questions too. Plus head to the bottom of the page to enter the fab giveaway.

So without further ado I’ll hand you over to Jackie 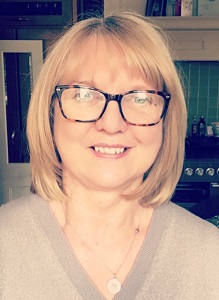 Jackie Ladbury was desperate to become a journalist when she left school but was ousted within minutes on the day of the exam at her local rag because she’d forgotten to bring a pen.
Short and sharp lesson learned.

Her budding writing career was not on hold for long, though, as Jackie found herself scribbling love stories of pilots and ‘hosties’ while she flew in aeroplanes of various shapes and sizes as a flight attendant herself.

Fast forward a good few years and, after being short-listed in a couple of prestigious romantic writing competitions, Jackie decided it was time to discard her stilettos, say goodbye to the skies and concentrate on writing romantic novels, where the only given is a guaranteed ‘happy ever after.’

I wanted to be a journalist but on the day of the entrance exam I was chucked out within minutes as I’d neglected to bring a pen with me.

My headmistress (a scary nun who is in my second book!) suggested in a school assembly, that anyone who didn’t want to be an academic should go off and be a hairdresser or an air-stewardess. I quite liked the sound of being an air-stewardess and I clearly wasn’t set for academia – so that was what I did.

I seemed to go from Enid Blyton straight to Sidney Sheldon and Jilly Cooper (or at least that how my mind remembers it!)

I was definitely a grown up, but can’t remember when it became a concrete decision. I faffed around with a lot of musings and poems and angsty stuff. Still have a little book of poems that I wrote as a teenager.

I drifted around the periphery of writing for a long time, not quite knowing where to start when I chanced upon the RNA (Romantic Novelists’ Association) and met a lovely, helpful writer called Fenella Miller who basically wouldn’t let me stop writing even when I was crappier than crap. That was when I finally started to take my writing seriously.

It’s chaotic really. I have no daily plan, apart from really wanting to finish a novel so that I can start another novel. It’s a bit of an addiction to be honest, but I try not to let it rule my life as, although I think my writing defines me, I have come to realise that it could take over my life if I let it.

I toyed with the idea, but as I’m not writing erotica or anything that would embarrass my family, I couldn’t see the point.

Not really. I love the idea of buying a new notebook or pen every time I start a new novel but I already have a cupboard full of notebooks and about three pens to every handbag (although I can never find one when I need one!)

Sometimes I write in a notebook, but as I am destined to be a scatty, messy person I worry that I won’t know where I’ve put said notebook when I need it, so I tend to just write straight onto the computer. I do like to brainstorm on a large piece of paper before I start and have a whiteboard on my wall full of ideas.

I have a small island’s worth of unpublished work and at least three completed novels that have never seen the light of day. But the novel I am going to get back to in 2018 was one of those early attempts, and although it is cringy in parts, there are bits that I’ve lifted and re-written and I think it’s not that bad – I think!

I’d love to be a proper plotter but alas I don’t think my brain is wired that way. I do have an outline and a general idea of where the novel is going and because I write romances, the happy ever after ending is a given (mostly) but I am not a linear person in my life or my writing, sadly.

I keep away from Goodreads mostly as I’ve heard there can be some cutting comments on there, but I do read all of the Amazon reviews I get. It’s annoying when readers don’t understand the rating system and give you a one star, when they think it’s really good. I shall stick my fingers in my ears and sing ‘La, la, la’ if I get a bad one!! 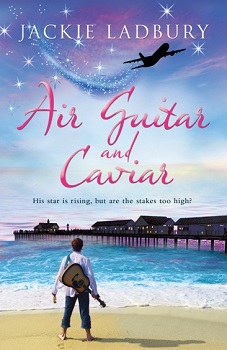 Busker Dylan spends his days pulling pints in the local pub and singing on the high street, waiting for fame to call. That suits him fine, until beautiful, but frosty, air stewardess, Scarlett, tosses some coins into his hat but ignores his killer smile and his offer of pizza.

He sets out to get the girl, but Scarlett isn’t in the right frame of mind to date anyone, let alone a penniless, if charming, busker boy.

Dylan’s desperate for his big break, but will it bring him the happiness he longs for? And with Scarlett’s past threatening to ruin her future, will Dylan be left to make sweet music all on his own?

Considering I pretty much rewrote the book and then increased it in size from 65,000 to 83,000 words it wasn’t too bad. About a year I think, but it was sitting on my hard-drive for three years before I revived it.

Dylan, my handsome busker boy was Dylan from the moment he came to life, but my frosty, troubled air-stewardess had lots of names before she became Scarlett. I wanted her name to reflect her aloof, almost snobby personality, but I also wanted her to sound as if she could be passionate and caring when the time was right.

Dylan, the busker, is just a regular nice guy who wants to be happy but is also fuelled by the need to become famous so he can make Scarlett fall in love with him. Scarlett is wounded and unwilling to take a chance on loving again but hides her true personality behind a frosty veneer.

I do find love/sex scenes hard to write – even the mechanics of it can be tricky combined with making the words sound emotive. It sounds silly but sometimes when I’m writing intimate scenes it almost feels intrusive – as if I’m a voyeur writing about their personal life. Yeah, weird, I know.

It came from out of the blue – which was a possible option for the title at one time! I guess I was brain-storming, rock star versus posh air-stewardess and Air Guitar and Caviar just sounded perfect.

Yes, a friend I trusted read it, but it’s not something I always do.

Gosh, I must have written The End about a dozen times and each time I really believed it, until I read through it one more time. Have never actually celebrated, because I’m so full of angst that it’s dreadful that I usually feel more like crying than celebrating, plus I never have just one project on the go, so as soon as I’ve finished one thing, I just carry on with another.

I do have a story about a chef and an out-of-work actress who live in St Albans, that I’m itching to get back to. Had to abandon it at 43,000 words due to other commitments but have now reached that point where it’s calling out to me again.

I have another airline book bubbling away in the background and I want to finish my chef and actress book soon. I’d quite like to write a sequel to The Potter’s Daughter which is a historical romance set in the Potteries. It’s coming out early in 2018 and I know it would be at least another year before I’d be able to write The End on that one. I need another pair of hands to help me write it!

Anything that I don’t have to make myself, but puddings such as Jam Roly Poly and fruit crumble with lashings of custard are a weakness.

Fuchsia pink at one end and silver at the other. I am a real ‘girlie girl.’

The Holiday – just love that film.

My guilty secret is that I love One Direction songs as they are mostly cheerful and ‘jiggle about’ music. In my defence, it’s my daughter who plays their music to death, but I am quietly happy to listen to it.

A top of the range Campervan. I sooo want a Campervan, but as much as I love the old hippie campervans, I’ve seen far too many broken down on the side of the road on the way to Cornwall to want one of those. Comfort and luxury is the way forward!

You can find out more about Jackie Ladbury by visiting the website/social media sites below.

Prize is 3 x Signed Copies of Air Guitar and Caviar by Jackie Ladbury – Giveaway is open to UK residents only. 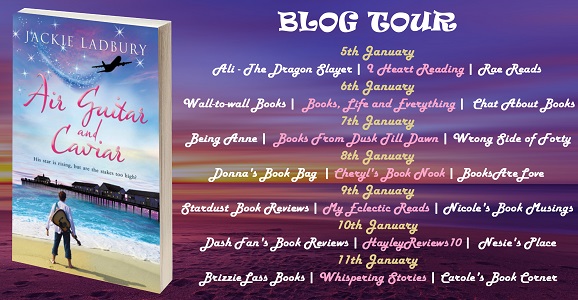 Later this year Jackie has a new book being released called ‘The Magic of Stars’. Tomorrow the cover reveal for her new book will take place, but today I bring you a sneak peak.

I would like to say a big thank you to Jackie for sharing with us details of her writing life, and for a wonderful interview.