The Writing Life of: Lisa Gordon

This week on ‘The Writing Life of:‘ I am thrilled to be interviewing author Lisa Gordon. Lisa will be sharing with us detail of her writing life, telling us all about her latest book ‘Next of Sin‘, which was released on 24th January 2014 and answering a few fun questions too. 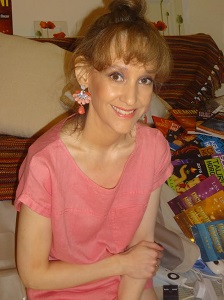 An only child to a single Mum, Lisa was born and brought up in Johannesburg, South Africa. Despite a lifelong ambition to act, she enrolled at the University of the Witwatersrand to do a BCom Law. She later moved to UK, where she achieved a BSc Industrial Economics Hons Degree from Warwick.

Still wanting to be a star – her Mum encouraged her to study ‘The Stars’ and Lisa became an Astrologer. Lisa worked on hospital radio for many year, before becoming a regular Astrology guest on BBC local radio. As an Astrologer Lisa was always asked by her clients to make black and white definitive predictions about their futures: this made Lisa ponder the role of fate in our lives and how much freewill we really had. Hence the plot for her philosophical thriller, ‘A Sealed Fate’ was born. Choice versus chance – which prevails?

Lisa wrote her book while also writing the ACA Chartered Accountants exams. She hopes to become a successful writer, not an accountant! Lisa is grateful to the wonderful support of both strangers and friends and their inspiration. Lisa is also grateful for having a ‘power-house’ Mum; who is her biggest supporter and best buddie.

Yes, I do. It was right after I had a tarot reading and the psychic said, “Do you know you are a very good writer.” I had never thought of writing before, in fact I was studying accounting and yearning to be an actress.

Writing was actually my saviour as it came at a time when I needed a direction and a goal I cared about. I started writing A Sealed Fate right away and was amazed when I found myself 9 chapters in – it came so naturally and suddenly I realised that this was way better than acting as it was my own words, I was not just speaking someone else’s.

My grandfather passed away, leaving a huge gap in my life as he had been like my father and I stopped writing for a few months, but I soon began again as he had said how happy he was for me to follow a career as an author as he knew I would do well at it.

I just started! Which is typical of me, I don’t plan things I just get stuck right it. I worked on the plot in my head at night and I wrote when I should have been studying for my audit exam. I guess when the alternative is audit, you’ll do anything including scrub an oven. I am not even a big reader, I am however very imaginative and making up stories in my head was always the way I dealt with worry, hurt, disappointment and stress all throughout my life from the age of 4. So the plotting was great fun and the main character was one I felt very attached to and so I relished the writing process.

Yes, I write in bed with my laptop. I write when I wake up on an empty stomach. I like silence, but for a fan or air conditioner noise. I never write at a desk..anything done at a desk feels like work.

I can write at any hour of the day.

Oh yes, coffee helps, but always cold. I don’t like hot coffee, like it mixed with cold soya milk.

Computer, I don’t think I made any notes even – just wrote.

Valda from A Sealed Fate – no question.

I have a basic plot and outline of main events mapped out, but I find that sub plots, twists and new characters emerge as if by magic as I write.

A string of murders dating back to 1987 and in all that time only one witness and she doesn’t even know she’s a witness!

Two teenagers fooling about on a camping holiday; a young woman marries surrounded by her loving family; an idyllic honeymoon; a salubrious law firm – the image of perfection and yet evil lurks. A body on a Moroccan Beach; a missing girl in Japan; a corpse floating in the Mediterranean – what is the link? The vital clue lies locked in away in a memory – a memory that now wants to be remembered.

A desire to explain a recurring nightmare, leads young lawyer Gaby to a horrifying discovery which throws into question everything she thought she knew about her past, her family and even herself. She is forced to stray onto the wrong side of the law in world where the scales of justice are rigged in favour of her eminent and respectable adversaries. Along with an unlikely set of allies from across the social strata she digs into her past, knowing that it will change her future forever.

Gaby’s hunt for the truth will cost her everything; it may even cost her her life.

NEXT of SIN took my 9 months to write.

I wrote my latest book ‘Not Guilty, Not Innocent’ in conjunction with a very good friend, and since he is an incredibly productive writer who can knock out 5000k words in a weekend, we managed to finished the book in about 5 months – although editing took us much longer. LOL Always does.

No, fortunately not. The worst thing often is finding time to write as much as you have saved in your head.

Valda (A Sealed Fate), was a character in a girl’s comic called Mandy, that I read when I was 8-10. It means spirited warrior.

Gaby (Next of Sin), is just a name I like. I choose names I like and sometimes names of kids I knew at school and liked.

I try to go for less cliched names. Names are often age and era specific ie who under 30 is called Sheila, Pam or Carol, those names are my Mom’s era. Names like Chantelle, Sophie, Chloe are very popular in the UK for under 30’s. In my era it was Lisa, Jackie, Nicki, Debbie, Michelle – names go on cycles and so I think you should think of which names were trendy in which decade and match the characters age. In the UK: Catherine, Fiona, Phillipa and Caroline are seen as POSH names – so I think as well about which names come over as posh or more down to earth.

Clinton was my first boyfriend. Brett and Richard were names that I thought sounded cool.

Me, I want to play Valda. LOL.

Uhm, let’s see. I think Angelina Jolie or Suranne Jones would make a good Valda. Bear Grylls would make a good Brett. (From A Sealed Fate)
Clinton is absolutely Tom Hiddleson. Gaby could be played by Anna Friel or Kerri Russel – except they are a little old. Maybe Emily Blunt for Gaby. Megan Mckenna would be great for Chantelle.

My grandfather read a few chapters, but he never saw the completed article. I did send it to a Literary Review Agency and they were both positive and negative – their advice was pretty confusing to be honest, but it did not discourage me.

You can find out more about Lisa Gordon by visiting the website/social media sites below.